‘Mom, have you downloaded the new Snapchat update? It’s so cool!’

Since I am not a regular Snapchat user, merely a mom who has downloaded the app to follow my kids and mess around with filters, I hadn’t updated the new feature.

And then I found out what it was.

Snapmaps is a location-based update that has an opt-in feature that shows other users where you are, via the bitmoji that you choose as your avatar.

Already, my teenage kids have updated it, are using it and familiar with it.

‘OMG, Lucas is in Mexico right now? What’s he doing there?’

‘Hey, Missy and Sara are hanging out together today and they didn’t include me!’

‘We are heading down to the beach today – we just told our friends meeting us to find us on Snapmap.’

So of course, I asked one of my kids to show me exactly what their Snapmap looked like, and saw literally dozens and dozens of kids with their features turned on. 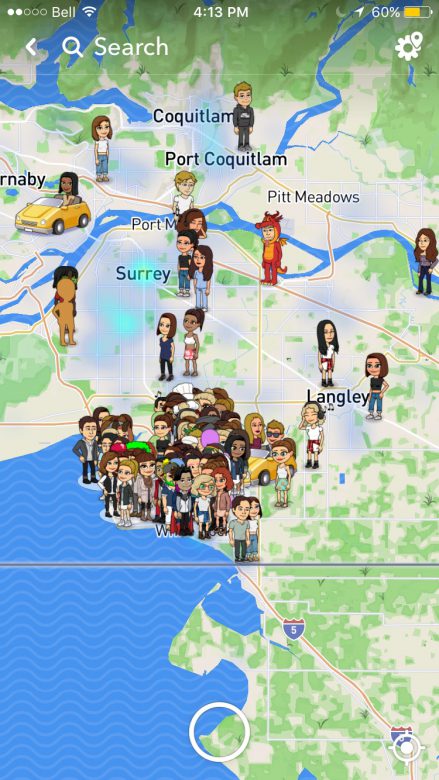 When I counseled my own kids about turning the feature off, both of them had it turned on to ‘Ghostmode’, meaning that you can see who is on it, but they can’t see you.

However, I know how these things go, and I can’t guarantee that they will keep it on ‘Ghostmode’. It’s a simple slider and depending on what is going on in their lives, or if they want to be ‘seen’ that day, I know that they can easily turn it on for a few hours when they choose too.

Snapchat has released a statement addressing safety concerns, stating that users are only showing locations to their friends:

“Snapchatters can choose exactly who they want to share their location with, if at all, and can change that setting at any time. It’s also not possible to share your location with someone who isn’t already your friend on Snapchat, and the majority of interactions on Snapchat take place between close friends,” reads the statement.

As a parent watching the Snapchat phenomenon in action daily, I beg to differ. The majority of interactions on Snapchat does not take place between close friends, but rather with hundreds of other teenagers that your kid knows in the community. Maybe they’ve laid eyes on them once before at the hallway at school, but it hardly constitutes calling them a close friend.

It’s hard to get teenagers to understand that creepy predators are just tickled now it’s even easier to locate their targets. And also that these predators may not be some strange old guy, but rather, another young person, maybe even someone you know, who is disturbed enough to use this to stalk you.

Millennial teenagers live in a bubble, perhaps because we have protected them so much. Their sense of community often happens on their mobile devices. It’s difficult for them to comprehend all of the bad things that can happen when you are putting yourself out there daily, especially citing your exact whereabouts via a pinpoint on a map.

I’ve used the Kim-Kardashian-robbery situation to explain to my teens that it only takes one corrupt person watching you to do something that you may not be expecting. I think my analogy has helped them understand how things can go very wrong if a ‘friend’ decides to track your whereabouts.

Tweens using Snapchat simply need to be monitored on the daily, in my opinion. While it’s easy to tell them to turn off their location features, if their friends are using it, they will be curious. It’s human nature. And it’s a neat feature.

But you can never be certain of other’s intentions when they are using the app; you only know your own.