Monday night both boys had soccer. Cam had a game and Cuyler had a practice that Eva and I were going to watch.
Last week he did really well with following instructions and participating in the drills. I wasn’t there but Sean said he was really happy with how Cuyler did. I was pretty excited to watch.
On the way to the field from the car Cuyler was overloading and was stimming like crazy. His movements were all jittery and he was vocal stimming to the point where I had to ask him to stop because it was annoying me.
I realized on that short walk that this practice likely wouldn’t be as smooth as last week’s.

I was right.  He did not engage at all with his teammates or the soccer club staff  who run the practice (with 3 other teams together).  He did not participate in any of the drills. He basically just wandered aimlessly skipping around the field not even close to any of the other kids.

It was painful to watch. I was annoyed. Frustrated. Sad.
And not really that surprised. He ended that school day off very badly – it took me almost 30 minutes to get him into the van after a meltdown, so he was already in a off mood.

It was just really, really obvious.
Obvious that he is different.
Obvious that he doesn’t quite fit in.
Obvious that he isn’t athletic.
And obvious that these people have no idea how to deal with him. After half an hour of watching him skip and flap around the field with nobody even trying to engage him, I walked across the field. That’s when his coach scurried over and kind of half ass said “Hey Cuyler come on over!”

Don’t even bother, mister I thought.
I stayed closer to him, chatting with him, trying to encourage him to get involved.
He showed no interest.
I’m trying not to let it get me down. It was one bad night. I was so excited about this season for him and I don’t want to assume that the next 3 months will be like this. But the visual of him in his soccer uniform wanting nothing to do with soccer after him begging for months to play was discouraging.
One thing that I did enjoy watching?  Eva doing handstands and cartwheels for an hour. 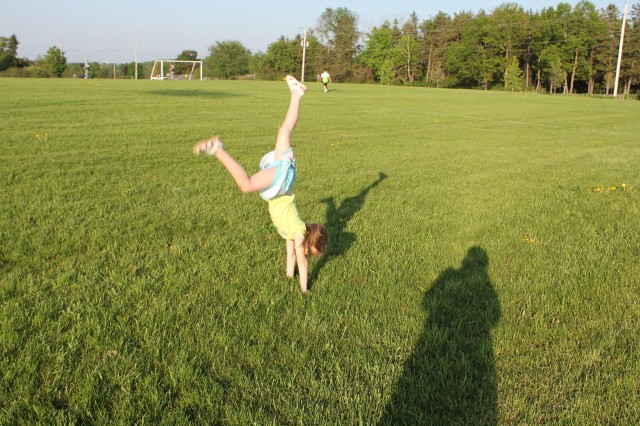