You are here: Home / Parenting / Autism / Lessons From the Pitch

Last Saturday I spent the morning sitting in the pouring rain, covered by the worlds worst umbrella. 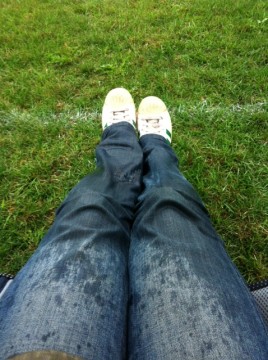 My jeans were saturated (is there anything worse?) and I wouldn’t have been anywhere else.

It was closing day for the kids’ soccer. Cuyler had the first game of the day at 9:30am. They played for 30 minutes before the whistle blew, calling the game due to lightning. The kids made their way over to the utter chaos that was the trophy handout.
The culmination of Cuyler’s first year of soccer. What he had been waiting for. The Trophy.

He got what he wanted.
And so did I – a successful season.

Cuyler is not a soccer player. He does not enjoy soccer and doesn’t really know much about it, nor does he want to. He touched the ball about 6 times all season, and three times it wasn’t deliberate.
My heart hurt a few times as I watched Cuyler skipping around, stimming not at all involved in the game or interacting with his teammates.
Seeing him with all of the other kids really made his deficits stand out.
Sometimes it surprises me how much that can still sting after 10 years.
I don’t think his purpose was to play soccer, but I do think he was meant to be on the team.
I don’t know what he learned this season, but he did teach a lot.
He taught acceptance.
He taught patience.
He taught compassion.
He taught kindness.

Ok, so maybe he didn’t teach his teammates those things, but Cuyler being on their team brought out the best in all of them. We saw those qualities in each of those boys every Wednesday night.
Not once during the entire season did I hear a negative word from a player, parent or coach. That was my fear.
Fear unfounded.
I really want to give a special shout out to Coach Gerry for encouraging and engaging Cuyler every week.
For wanting nothing but a successful soccer season for Cuyler and going out of his way to make that happen.
I really hope that if Cuyler chooses to play soccer next year that he’s placed on coach Gerry’s team.

Autism and team sports don’t always pair well together but this experience as a whole was very positive experience.
I couldn’t ask for more.

Thank you boys, for being such great teammates! 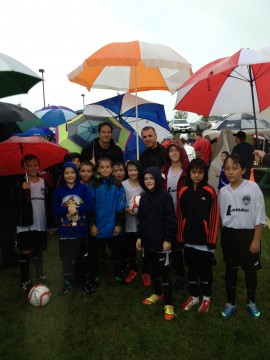