You are here: Home / Life / What I Want My Kids To Remember Long After November 11

My grandfather didn’t like to talk about the war. In fact, I’m not sure I recall a single conversation with him about it. I knew all about his participation, though. My dad made sure of that. I knew he had lied about his age to enlist and turned 19 on the boat leading him to battle overseas.

I knew he had been on the beaches of Normandy a few days after D-Day, and that he had been injured by a rogue torpedo a mile inland, the lasting effects contributing to the stroke he suffered when I was three.

I knew that his photo was used without his permission for a recruitment poster, causing grieving mothers to call him “Judas Cow.”

I knew the logistics of WWII and I knew the experiences of the soldiers. I was reminded whenever I looked at my Grandpa, even though it was never directly discussed. It was always there, this invisible cloak of respect and quiet regard for what he had sacrificed to protect his country and make a better life for me.

In grade 11, my drama class was tasked with putting on a Remembrance Day performance for classes within the school. My father offered me a stack of letters written by my mom’s uncle, who was stationed in England and Italy for the war. I had heard him referred to as “Crazy Burt” many times in my life, though I don’t think I ever met him. A man who had lost his mind and succumbed to alcoholism, largely dismissed by the world at large. The name enraged my father. When I read the letters, I knew why.

Reading them one after another, chronologically, you can track his slow transition from naive kid performing office duties in London to disillusioned, shell-shocked soldier. You can watch his innocence fade with each letter. It is absolutely gut-wrenching.

I grew up with a reverence for veterans, not just because of the stories, but because I knew them. Poppies were sold by old men and women with the imprints of battle in their eyes. They weren’t an abstract story in our history books, they were the neighbours next door. They were our family. 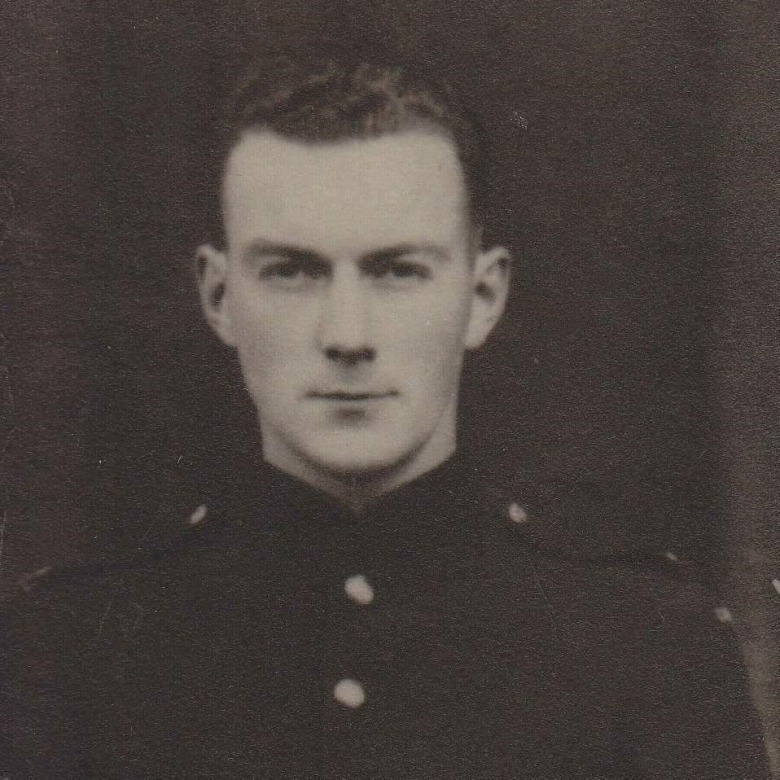 Heather Jones’ grandfather, Lynden Morrison, fought in WW2 and had his image used in a recruitment campaign.

As this brave generation passes away, I worry that my children won’t be able to make that personal connection to Remembrance Day. At the same time, I am keenly aware that their lack of a connection to it is a direct result of the sacrifices made by these same soldiers in order to spare them from having that experience. Their distance is a gift. But I want them to understand, to really get why this day is so important.

When we discuss the Great Wars, we make sure that we don’t stick with the facts alone. We hammer home that it was a war between countries, but it was fought by individual people. People with lives, and families who loved them. My grandfather was a mere 9 years older than my son when he enlisted. My son isn’t even allowed to walk to school alone yet.

In addition to keeping the meaning of Remembrance Day relevant and appreciated, I am struck by the heartbreak that there are children in my kids’ school who have experienced war first hand. They have seen more cruelty, hate, and fear in their childhood than anyone should experience in a lifetime.

It’s important that my children understand that war did not end with WWII. It is not something that happened in the past, never to rear its ugly head again. Canada has taken on a new role in the fight against war. We may have fewer soldiers on the front lines (though it is still important to note that we do have soldiers our there in the direct line of danger) but we are still affected by war.

It’s our job now to take care of the victims. We need to be their advocates and their protectors. We need to provide a better life for them, just as our ancestors fought to do for us. I want my boys to know that the best way to honour the sacrifices made by the men and women who came before us is to use the freedom they afforded us to help others. We can show our exceptional gratitude for the freedom given to us by those brave veterans by extending that safety and security to those who are vulnerable.

I want my boys to really understand why we observe this important day, and to carry that reverence at all times, not just on November 11th. Each year, I ask my oldest son what he thought about during the moment of silence. His answer gives me hope that the message is sinking in. His understanding and respect for the sacrifices made for him sometimes bring on big emotions in him, and I want him to really feel those. He wears his poppy with a heavy and grateful heart.

Remembrance Day is aptly named. It’s not just about acknowledging, it’s about really making the effort to remember the people in the war. They weren’t strategies or operations. They weren’t one country against another. Every one was a person. Every one mattered, and matters still. My children and I remember you with gratitude, brave souls. On November 11th and always.