You are here: Home / Reviews / Travel / Travel Spotlight: Eze and the South of France

Where do you want to go? This is the question my hubby asked me about 8 months ago when we knew our 20th anniversary was approaching. Italy? Hawaii? California? Iceland? Greece? Croatia?

We finally decided on the south of France – the Cote d’Azur. We started in Nice where we spent a couple days leisurely wandering the streets with the fresh flower and produce market. We picked our way through the antique market — I lusted over vintage Hermes handbags and Dior jewellery. We visited several museums especially since admission to many were free. We wander into Hotel Negresco which is a museum in itself. Celebrating it’s 100th anniversary there were antiques and artwork on display throughout the gorgeous historical and iconic building. It’s amazing when you see history like this! And at the end of each day, we were grateful for the soothing water therapies spa at our hotel, the Boscolo Exedra Nice.

Since this was a mega anniversary, I had mentioned to my hubby months ago that I also wanted to stay somewhere that was steeped in history (maybe with a few modern amenities) that we’ll remember forever. I’m not too high maintenance, really. So, he did his research and mapped out our vacation. 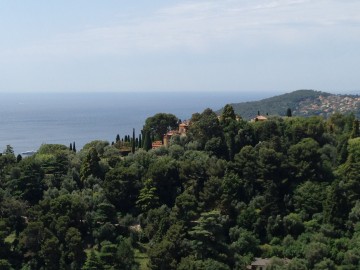 Driving on our way to Eze we stopped along side of the road to catch our breathes. My inspiration for my next painting!

We rented a convertible Citroen, left Nice and headed out to Grasse where essences of fragrances were created and visited Fragonard’s perfume factory and museum.  We visited Cannes to do a little window shopping. We also ventured to Monaco so hubby could experience driving (er…walking) on the Grand Prix circuit that runs through the city (his bucket list…check). And then we went to Eze.

Eze Village is a small medieval town located within minutes from Monaco. The stunning drive was enough to make your jaw drop to the ground as the roads wrap around mountains along the Cote d’Azur. The last time I felt like “heaven on earth” was our trip along the Pacific Coast highway in California.

The area surrounding Eze was first populated around 2000 BC. It’s been described as an “eagle’s nest” because of its location overlooking the high cliff about 1400 ft above sea level. Apparently Walt Disney spent a significant amount of time in Eze. The oldest building in the village is the Chapelle de la Sainte Croix which dates back to 1306. It was also once the residents of King Gustaf of Sweden. It’s a historical treasure not to be missed.

Eze is only accessible by foot (or maybe donkey). Cars park at the bottom of this historical spot and  then you walk through this charming medieval stone village spotted with tiny art galleries, restaurants and shops. There’s an ancient church and cemetery dated 1890 which I could NOT step foot in. Beautiful statues are scattered up top where the Jardin Exotique gives the most incredible view of the coast. 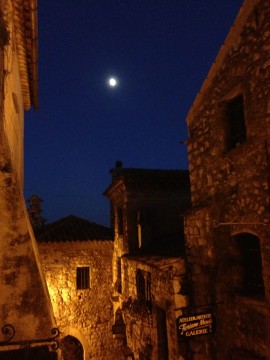 Many tour buses make this a “must see” on their day-trip stops along the coast. The village is busy with cameras poking everywhere around breakfaste time and go all day but around 5pm the village became ours. With only a handful of tourists and hotel guests we felt like we had  it all to ourselves. The shop owners, restaurants and artists come out and chat. It’s relaxed and you feel like you’re amongst friends. The cool musician smoking on the step chats and offers us wine as we walk by. We stop and hang out. Turns out he’s into reggae, hip hop and dubstep mixed with a bit of French, of course.

This medieval village has two hotels. The spectacular Chateau Eza has only 10 rooms and a Michelin starred restaurant on site. It is one of the most sought after locations for romantic getaways. The rooms are set in the stone along the cliffside and the interiors have been updated and include luxurious state of the art bathrooms that have open windows with stunning views.

I could go on and on about how incredible this trip was for us but instead, I’ll let the photos show you.

Our anniversary dinner table at the spectacular Chateau Eza…no words can describe it. 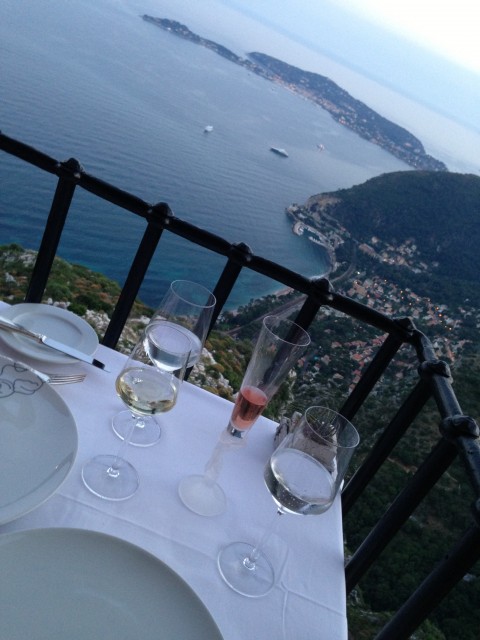 The restaurant at Chateau Eze. 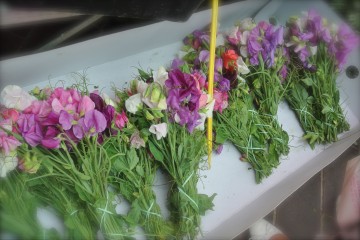 Fresh flowers at the open market in Nice, France. 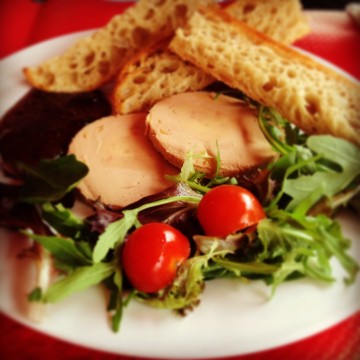 Foie Gras for breakfast anyone? 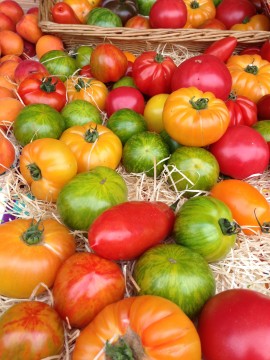 Beautiful tomatoes in the open market in Nice, France. 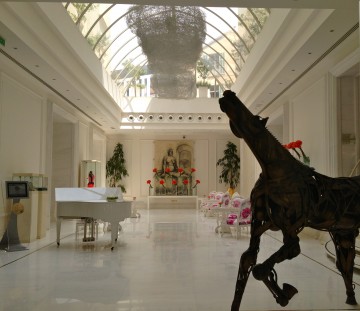 The lobby at the Boscolo Exedra Nice, France. 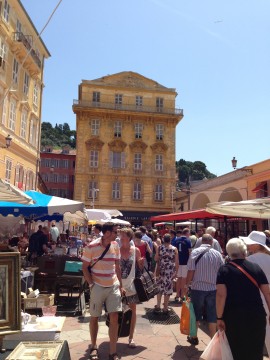 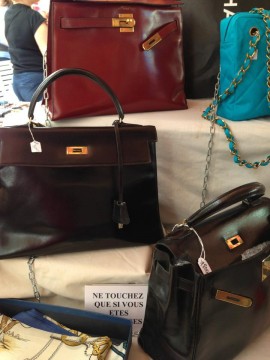 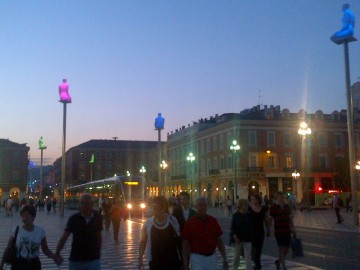 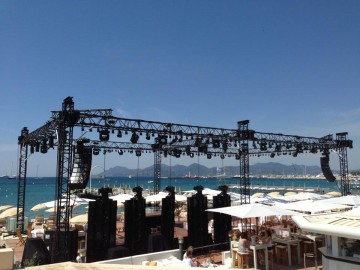 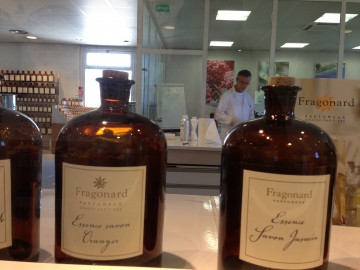 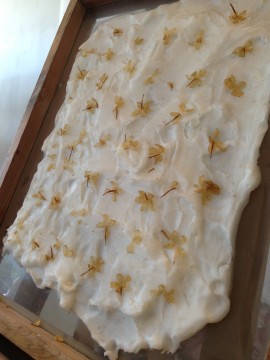 The Fragonard Laboratory in Grasse, France. 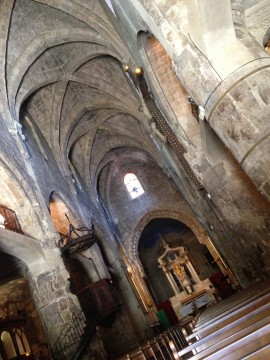 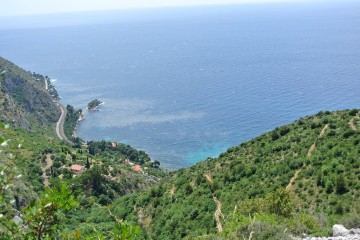 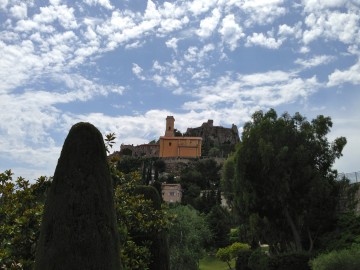 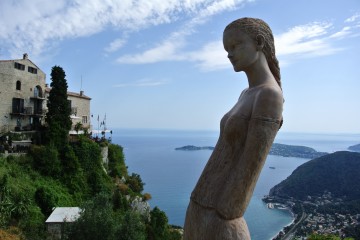 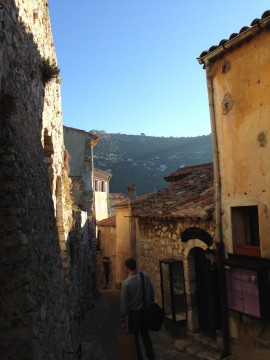 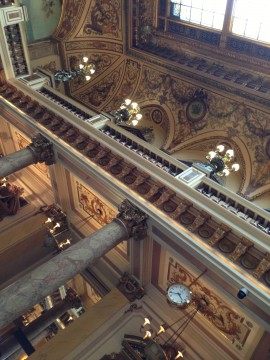 Stunning architecture inside the Monte Carlo Casino – hoping the Daniel Craig would show up. 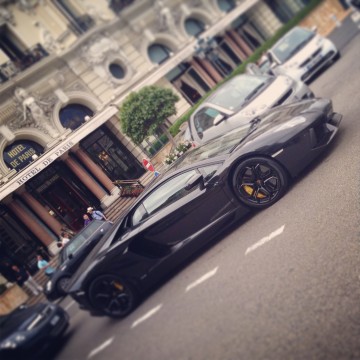 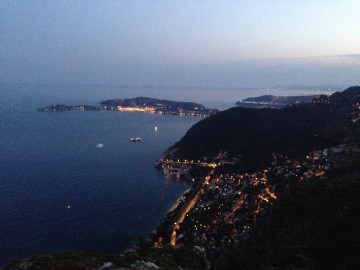 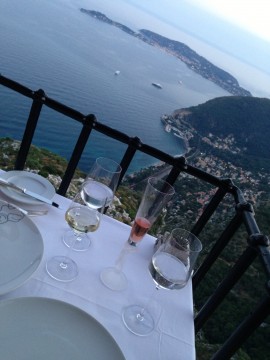 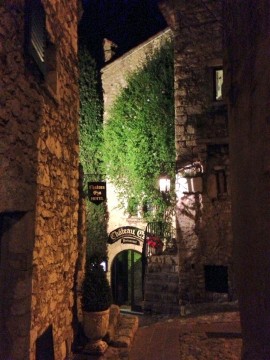 Have you been anywhere that took your breathe away? I’d love to put it on my “bucket list”!

This post is not sponsored nor was I compensated. All opinions are my own.