You are here: Home / Reviews / Travel / Celebrating 110 at the King Edward Hotel

There are a few iconic buildings in Toronto but when you walk through the doors of the 110 year old King Edward Hotel, you can just feel the opulence and imagine all the incredible stories of grandeur (and gasp!…scandal) that have occurred throughout the years.

Kind Eddy (as affectionately known to Torontonians) was the city’s first luxury hotel. Built in 1903 by George Gooderham, a developer and one of Toronto’s wealthiest men – at a cost of $6 million. Room rates back then started form $1.50 a day for a single room without a bath and $7 a day for bedrooms with a parlour and private bath. 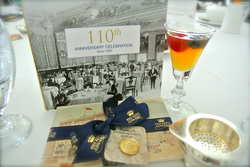 Much like the English counterparts, the hotel also featured a lounge where men would enjoy an evening of port and cigars after dinner, while the ladies sipped tea in the upstairs sitting lounges.
In 1921, an 18 storey was added which would become part of a lavish social venue – The Crystal Ballroom that was “the” place to be for high-society weddings, balls and public announcements. In fact, in 1955 medical practitioners used this space to announce the results of polio vaccine trials.
Not only did socialites enjoy the space but the hotel has hosted many celebrities over the years. Remember John Lennon and Yoko Ono’s famous bed-in for peace? Yep, their press conference was held from the bed in suite 869 (previously the Vice Regal Suite) before leaving the next day for a week-long stay in Montreal where they recorded the single Give Peace a Chance.
The Vice Regal Suite was also where Elizabeth Taylor and Richard Burton ‘lived in sin’ in February 1964. The Kind Edward Hotel’s Sovereign Ballroom is said to be the place where Burton eventually proposed to Taylor.
In 1980 the hotel went under a massive renovation that included the creation of a brand new Royal Suite. This living quarter has hosted many celebrities including Michael Douglas and Catherine Zeta-Jones, Martha Stewart, Jamie Lee Curtis, Britney Spears and many more.

The hotel is a landmark in the city with a very rich history so worthy of a visit and not just from out of town guests. From the cool  Beefeater welcome to the luxurious rooms and the perfect afternoon tea service, it really is a place of enjoyment.
I was invited recently to Afternoon Tea and enjoyed every unhurried moment. The hosts delighted the media table with tidbits of great juicy hotel gossip and facts while the most perfect traditional tea service was offered. The chocolate dipped, Earl Grey infused madelaines, the house made fresh lemon curd, the buttery goodness of their famous scones and other treats had made this afternoon one spectacular memory.
I had also learned that the King Eddy was progressive back in the day accommodating women who travelled alone. They ensured that women felt comfortable and tended to their needs without the worry of being judged by society. The hotel offered discreet services including bookings of theatre tickets.
But what absolutely blew me away? Items from the hotel’s historical vaults are now on display for the month of May. From the guest book to the newspapers to fine china that was used by Margaret Thatcher – this is all worth checking out located in the main lobby area. In addition, across from this display is a newly erected historical wall with images from years past.

A few events have been planned for the month-long celebration. The Consort Bar will take on the atmosphere of the hotel’s original 1903 Grill Room with daily menus recreated from the hotel’s earlier days. Traditional Afternoon Tea service will be held every Friday, Saturday & Sunday in May and Sunday Brunch every Sunday in May. But also inquire about the local city Tram Tour and Tea service. Great for history buffs!
The King Eddy will participate in Doors Open Toronto (May 25)  where the public can tour the hotel with their historians. The rarely-seen 18th Floor Crystal Ballroom will be made accessible for this one day only. There will also be a book signing with Jerry Levitan, author of I Met the Walrus, inspired by events that happened at The King Edward Hotel. Amazing opportunity if you can make it!
And if you’re interested in living the dream. The hotel has also brought back its popular $110 room rate on books of two nights or more through the end of the year.
Under management of Skyline Hotels & Resorts since 2012, the hotel is set to undergo a massive renovation of its guest rooms, lobby and Crystal Ballroom with aim to be completed in 2015. I can’t wait to see the transformation!
Visit the  www.thekingedwardhotel.com  for all special events and bookings!
Now, pardon me as I step away from my computer to book in another regal afternoon tea!