You are here: Home / Reviews / Others / Prenatal Barreworks 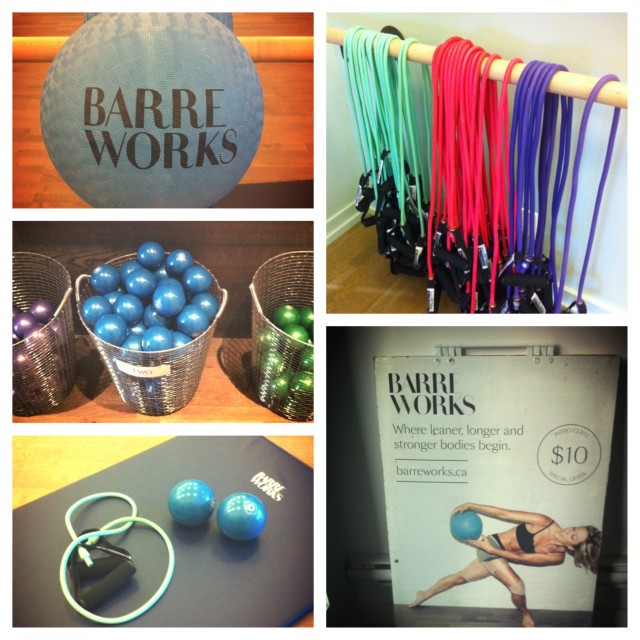 The other night I was treated to a very fun pregnancy friendly class at Barreworks. The Barreworks exercise system is a program that incorporates the ballet barre, resistance bands and weighted balls into an energizing fitness class.

Despite being nine months pregnant I managed to follow along with the group. I chose the BarreBasics class where they introduce you to the basic movements and positions of the Mixed Level class. It’s fairly low impact and slow, so it’s easy to keep up with a giant belly and all of the other pregnancy ailments. The instructor provided me with a lot of low impact options and was sympathetic to my “condition”. I think I probably would have had an easier time had I been doing these workouts throughout my pregnancy, but I managed.

I must say it was a fantastic arm and upper back workout, which is key for when that little munchkin comes into the world and you’re spending countless hours breast feeding. I could have done without the cardio portion only because I’m at the end  of my pregnancy and cardio just isn’t happening for me these days. If you’re looking for a workout with reduced cardio I was told that the bAAAre class is the one to take and would be great for preggers. The class is designed for maximum sculpting and chiseling (yes please!) – basically lots of stabilizing and strengthening combined with stretching.

Now, if you’ve had the babe and you want to get your bod back into pre-baby shape the Mixed Level class is for you. They also offer SpinBarre, which is part spin class part bar class. Sounds super fun, but obviously too much for me right now.

So if you’re looking to switch up your exercise routine give Barreworks a try. They have two locations in Toronto, one on Queen West and another in the north end of the city on Yonge Street. The facility on Queen is also very nice. The changerooms are gorgeous complete with lockers, towels and showers and the price of classes is reasonable and equivalent to yoga classes in the city. I think you’ll really love it.

What have you been doing to keep in shape throughout your pregnancy?