You are here: Home / Parenting / Your Kids Don’t Give A Sh*t About Your Summer Activities And Bucket Lists
Share this...

“Stop making that noise, it makes me want to throw squirrels.”

The sound of crackling plastic was driving my husband to the point of rodent aerodynamics. It was day two of summer break. The day before, he was rejoicing at no longer having to pack lunches and fight the morning traffic driving our son to school. And now he was mentally throwing squirrels.

While the likelihood of my husband playing squirrel toss was low (and would probably be pretty ineffective, I’m just guessing,) the struggle was real. We barely had our toes wet into summer vacation, and we were already going crazy.

As a former preschool teacher, I am no stranger to programming activities for children. I helped run a summer camp program, I know how to keep kids busy during the summer. I also know that they never want to do anything you plan, so don’t even try.

On the weekend, we decided to treat the kids to McDonald’s and my oldest was disappointed because he wanted a tuna sandwich. In what world is McDonald’s a let down to a nine-year-old? In the world of summer vacation, that’s where.

I bought rocks for us to paint. They are still sitting on my nightstand. Eventually, I will just accept them as an earthy accent to the room.

Getting them to the park is like pulling teeth. It’s a park, you’re a kid, go climb on something that isn’t part of my body.

On day three, they broke our bed. My understanding is that they were training for a big wrestling event that existed only in their heads. While I lost my mind at my bed, which is now at a 45-degree angle from the floor, they were mostly concerned about where they would train now that this venue was closed for renovations. At the park! We have had this discussion before!

Each year, our neighbours set off fireworks right outside our house for Canada Day. Usually, this gives me visions of pretty explosives coming through our living room window, but this year, I figured if they hadn’t burnt down the neighborhood by now, they probably knew what they were doing. Rather than deal with traffic and people (ugh, people), we stayed home, gathered the kids and some sparklers, and sat on the front porch to watch…nothing. My neighbours took the year off, and I didn’t get the memo. Know what kids love? Hearing fireworks all through the city and being unable to see any of them.

Well, we still had the sparklers. The wind prevented us from lighting them on the porch, so we lit them inside the front door, and silently prayed not to set anything ablaze as we ran back outside to hand them to the kids. Kid #1 loved them. Yes! One planned activity has gone off without a hitch! Almost. Kid #2 screamed blue murder that he was going to burn himself. Finally, after Mom, Dad, and Grandma all convinced him it was fine, and that we wouldn’t be giving it to him if we thought it would be a problem, he took the sparklers, played happily for five minutes, then burned himself. At least when he is 25 we will be able to pinpoint where his trust issues started.

So I’m done planning. My four-year-old is more content with his broken Easter basket turned private chariot than anything I will come up with, and my nine-year-old is too busy being angsty to engage in structured activities. They can have a summer of random play, occasional Minecraft, and hours and hours of me yelling up the stairs to stop fighting.

My new goal is to come up with more creative ways to tell them to knock it off. Maybe I’ll write a book, “65 Ways to Lose Your Shit With Flair.” One for each day of summer vacation. I don’t think I’ll ever top throwing squirrels, though.

Summer used to be magical. The hot weather, the outdoor adventures, the complete and total lack of responsibility. School was over for the year and … END_OF_DOCUMENT_TOKEN_TO_BE_REPLACED 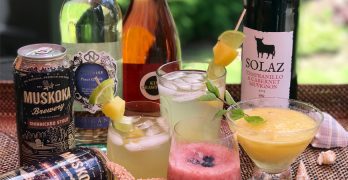 Summer entertaining is meant to be easy. We'll have impromptu get-togethers after dinner with friends and neighbours. Who doesn't love to watch the … END_OF_DOCUMENT_TOKEN_TO_BE_REPLACED