You are here: Home / Parenting / Who Says You Can’t Engage Kids In Politics?

Small voices are sometimes the loudest.

No, I’m not talking about the wailing of a baby or the howls of a distressed toddler. Let’s just say that often, in the innocence of youth, there lies plenty of wisdom.

A developer wants to put a giant medical building smack dab in the middle of the beautiful heritage property behind my daughter’s elementary school. Residents in the neighbourhood have formed a joint rallying cry against it.

I won’t get into the nitty gritty of how we got to where we are now, to a place where a developer got a hold of a property in the middle of what was supposed to be parkland. But last week I was set to attend a meeting at the town hall where residents were invited to speak their minds against the proposal.

In an effort to teach my 8-year-old daughter about democracy, on the way home from school I told her about the plans and why I was going to attend the meeting. She was horrified. “But that’s our park! Sammy [the owl – a real owl!] lives there!”

You see, the parklands behind her school are a second classroom. Phys Ed classes go there daily in the warmer months. Younger grades do nature walks and ‘discoveries’ there. Everyone at that school, all 1,100 students, know about the owl who resides on that property. “Where will he go?” she asked. I didn’t have an answer. “But that’s his home!”

She asked if she could come to the meeting.

So, after a brief discussion with my husband, we decided the council meeting would be a great experience for her to witness. I thought it would be eye opening for her to see how, when I bring her to that town hall to vote, we are picking the people who are sitting in those chairs in the council chamber.

But in that council meeting at the town hall, it wasn’t my daughter’s eyes that were opened. It was mine. 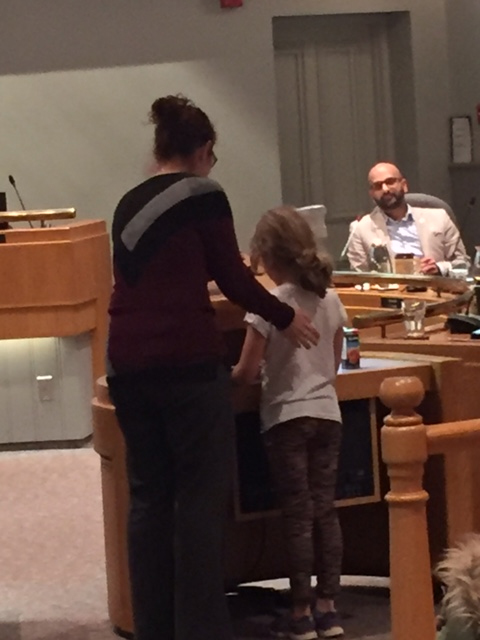 My daughter is a tentative child. She hates being the centre of attention. But that night, she stepped up to the occasion. Why? Because she loves that park. Because a building on the top of a hill in the middle of her park makes zero sense. Because logic. Because of all these things, she wanted to tell those people to say no to the developer.

After her speech, many residents got up to share their own concerns; among them, three other young children. The Prime Minister for the grade eight class (that’s right, our school doesn’t have a president), the child of a teacher in the school who also attends, and a nine-year-old girl. The children told that group of council members why they should vote no. They told them what that park means to them, to the school and to the community in which they live. They spoke of the value of nature, the value of play, and the value of community.

Twenty-one members of the community spoke that night. There were power point presentations and videos and diagrams and incredibly powerful, sensible, well thought out arguments against the proposal to plop a medical building in a park.

I don’t know what is yet to come, which way council will vote and if the developer will appeal if our council tells them to take a hike. I do know that everyone was moved by the extent of the presence of the community in that room and especially those brave children; children who did what many adults wouldn’t have the guts to do. I’m proud as proud can be that my 8-year-old daughter was among them.

And I do know that of all of those 21 voices, the loudest came from the smallest people there.