You are here: Home / Parenting / Autism / Theatre: Dreaming In Autism

I went to see a play called Dreaming in Autism, which was written by my friend Christine Rodriguez – it depicts what life is like living with a child with autism, and how it affects the family – something she knows of first-hand. The production  showed at a private high school near my house, so once I had the all-clear to leave home for the evening, I ran up the street and bought a ticket, and took a seat amongst some familiar faces in the crowd. Lots of other parents, some students, teachers and other educators came to see the show – perhaps again. It’s the third time it had been presented at Selwyn House school in the last year or so.

Much like watching a musical act live, there’s a sense of connectedness that comes from being with other people as you all bear witness to what you’ve come to see. It’s kind of electric. I love the silent focus everyone seems to have when you can hear a pin drop. And as the lights illuminated the all-white stage pieces, we hushed, and our ears were filled by my friend’s lovely and girlish singing voice. A Spanish-sounding lullaby called Arru Arru… 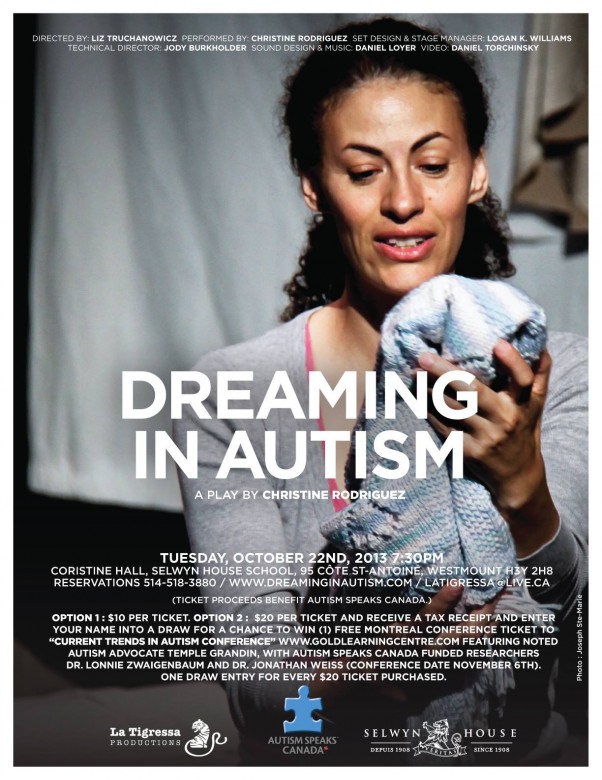 This hour-long play had everyone rapt. We all laughed at the hilarious bits, and we held our collective breath at the tough parts… we all had tears in our eyes as Ms. Rodriguez carefully and artfully showed us what life is like in her house, as she struggles to raise her son – when government services seem limited and unproductive. Trying to remain sane and relatively calm when your child repeats and repeats and repeats the same questions over and over and over again. How to maintain when your marriage is crumbling under the strain… it all makes my own life feel like a cake-walk. I wanted to weep for my friend. I thought of our own Christine, too, and what a struggle we know her life to be a lot of the time, but exposure and awareness can change people’s hearts and minds.

It’s not victimhood – it’s just a life (but a tough one, at that.) I left with a better understanding of what a whole life looks like, and not just of what the affected child is like. It was sobering indeed. And heartbreaking. And wonderful. And brave as hell. No wonder Dreaming in Autism has won awards as it’s travelled around – it’s been shown in Ottawa, just last month in Winnepeg as part of FemFest 2013. Ticket sales benefit Autism Speaks Canada.

More awareness is needed, and this play is an excellent tool in helping do just that – to help people see other people, other families, child by child.

I loved this excellent production. If it comes to a city near you, it’s worth going to see.