You are here: Home / Parenting / Autism / Taking a Step Back

When Cuyler was in senior kindergarten, Sean and I made the very difficult decision to hold him back from grade one and retain him for another year of SK.
It was not an easy decision. We did not take it lightly and we had a lot of convincing to do as far as administration at the school.
The 2 biggest factors for us were that he is a November kid, and he is a November kid with special needs.
We wanted to ensure that he had the strongest foundation we could give him as we prepared him to go from a play based curriculum to an academic curriculum.

There have been so many bittersweet days since that decision – because of that decision.
The 2 most profound for me were a) when all of his kindergarten classmates headed into their grade 1 lineup and Cuyler went back into the kindergarten yard and b) when all of the kids he started at this school with graduated and headed off to middle school.

It made my heart hurt but I know in my mind that we made the very best decision for him. I’ve never felt an ounce of regret about it.

However, seeing all of his former classmates head off to middle school got me thinking about Cuyler heading there next year.
It actually had me obsessed. We are only midway through October and I have found myself near panic-attack mode thinking ahead to a year from now…
Will he take the regular bus or will I get a SpecEd bus to pick him up at our house?
Will he go into a life skills class or stay mainstreamed with his friends?
Will the kids from the other feeder schools who don’t know Cuyler like him as much as his familiar friends do?
If they don’t, will his familiar friends be influenced by the new kids and turn their backs on Cuy?
Will Cuyler head into middle school still obsessed with the goddamn Wiggles?

The thought of him leaving his elementary school makes my stomach turn. I feel like he is in the safe confines of this one small school with one hallway and just over 200 students – most of whom know Cuyler. This is a little bubble of security for me.
I have to start preparing myself to let him go out into a world that’s bigger than my comfort zone.
I have to prepare myself for perhaps more of the shittier parts of autism. Will he be bullied? Will he stand up for himself if he is?
I also have to prepare him for opportunities for success. For independence.
After all, those are our goals for him.

So I must force myself to take a step back. Take a deep breath.
I must allow myself to enjoy where we are and not worry about where we’re going.
This time next year I might be wishing I was here so I might as well be grateful for where we are NOW.

This is his last year with his EA. I need to embrace the fact that right NOW nobody knows him better than she does.

I am going to do my very best to enjoy the security of this bubble and appreciate that I am in it.
I will worry about what needs to be done now and not what might have to be done a year from now.

I will enjoy grade 5 with Cuyler and all of the exciting things that await him this year.
I have to remind myself that these same feelings came upon me as Cuyler graduated out of the safe confines of his preschool class. 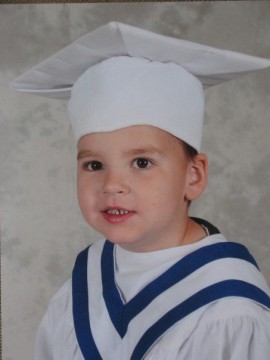 What I feared so much about the school system has now become my security, so I have to have faith that we will make the same positive transition into middle school.
Next year.