You are here: Home / Parenting / Illness / Surprise! That Time My Child Almost Died

It all started with a tummy ache. Not a terribly bad tummy ache — enough to miss school — but not enough to worry me just yet.

A little later on, I turned to Facebook for advice instead of commiseration:

At this point, everyone (myself included) thought she was the victim of a particularly nasty strain of gastrointestinal virus. I proceeded to sanitize all surfaces and began washing my hands compulsively to prevent the spread of infection.

We were seen by the triage nurse, and my worst fears were confirmed.

By the next day, however, she was running a fever (40C) and I took her to our family physician. She still had abdominal pain but it wasn’t severe and was mostly located on her left side, so our doctor felt it wasn’t likely appendicitis, although she couldn’t absolutely rule it out. I brought her back home with instructions to keep her hydrated and head to the emergency ward at the Alberta Children’s Hospital if her condition worsened.

In the meantime, her older sister began to run a low-grade fever and I made bad jokes.

I was 100% certain our home had been invaded by norovirus and I was doing all I could to avoid getting it myself. I had already missed two days of work and was determined not to miss a third.

Obviously I was frustrated, but I still didn’t think it was serious.

And yet a little later on that same day, when I looked at my little girl, I knew something was very, very wrong. Her skin was waxy and yellowish, her eyes were glassy and sunken in big dark bowls, the skin on her hands and feet was mottled. I have sat vigil at the bedside of a dying loved one, and I thought, I know that look.

Certainly nobody thought it was her appendix. She didn’t have any of the telltale signs of appendicitis.

When I realized that, I became truly frightened for the first time. I picked her up and gingerly placed her in the car. I drove with shaking hands to the hospital. I carried her in to the waiting room and put her name on the triage list. All the while I was rationalizing. Telling myself she was just very dehydrated and just needed an IV. Steeling myself for a long wait. Denying what my eyes and heart were telling me.

It was only a few minutes before we were seen by the triage nurse, and my worst fears were confirmed. With dangerously low blood pressure and a dangerously high heart rate, my girl was rushed into a room and hooked up immediately to two IVs, an ECG, oxygen and blood pressure monitors. Doctors rushed in and asked questions, prodded her tummy, looked at the monitors and creased their brows with worry and consternation. 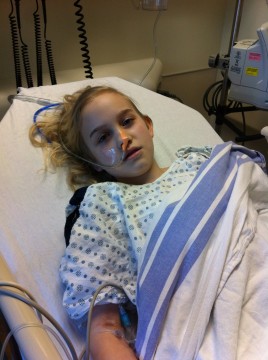 “She’s the sickest child we have in Emergency right now, and what worries us most is that we don’t know why she’s so sick,” said the doctor. Surgeons were consulted. There were ultrasounds and X-rays and still no indication why my little girl was lying on a stretcher, dying. Possibilities were discussed, investigated and eliminated: severe kidney infection, perforated bowel, meningitis.

Certainly nobody thought it was her appendix. She didn’t have any of the telltale signs of appendicitis: no pain in the lower right abdomen, no rebound pain, not even an elevated white blood cell count. She did, however, have a list of other life-threatening problems, and was quickly hooked up to more and more monitors and tubes. After a few hours she was stable enough to be taken for a CT scan, the results of which finally confirmed what nobody had thought possible before:

What happens to your insides when you live for several days with a perforated appendix is not funny. Not even a little.