You are here: Home / Parenting / Parenting Issues / Dear Dads (And Future Boyfriends), You Don’t Own Your Daughter’s Body

“Don’t mess with her,” reads the caption.

In the picture, a delicate baby girl sleeps, with older brothers of varying ages surrounding her, putting on their toughest faces. Adorable, right? Well, it is, until you really ponder it.

I know what you’re thinking. “It’s just a cute photo, do we have to be offended by everything?” No, I’m not clutching my pearls at this photo. I’m not “triggered.” I do get the humour meant by it…I just don’t like it. 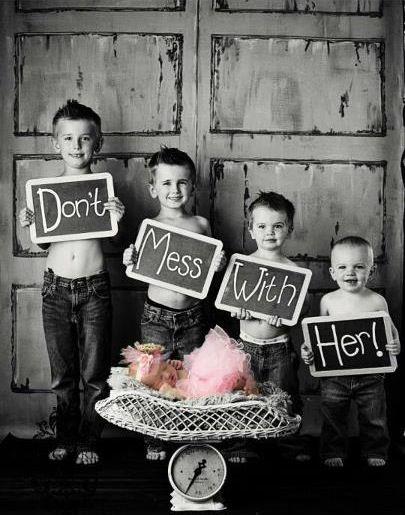 Can’t she say “Don’t mess with ME”? What about when the youngest boy was born—where was the photo of the older brothers saying “Don’t mess with him”? I have two boys, and I expect them to look after themselves and each other as much as they would a sister. I’d expect a daughter to look after them too. But yes, I suppose I could be reading into what is considered just a cute photo. It just rubs me the wrong way.

However, the “frequent share” that really does make me see red whenever it comes across my screen is the so-called hilarious dad shirt with the rules for dating his daughter. Highlights include, “I’m everywhere, “She’s my princess, not your conquest,” and “Whatever you do to her, I will do to you.” Also included: threats of violence, the suggestion to get a lawyer, and the proclamation that Dad is not afraid to go back to jail. Get that, future boyfriends? Dad owns her, not you. She’s HIS. And since she can’t possibly be trusted to create boundaries for herself (not that you would respect them anyway), he’ll keep you from her by any means necessary. Hi-larious. That totally sends an empowering message to young women about their rights to their own bodies and the value of their autonomy. The best way to raise a woman who will stand up for herself against a controlling partner is obviously to dominate them as much as possible.

Image via My Father Daughter Store

I really hate that shirt. A lot. I make sure I comment about how much I hate that shirt and why whenever my friends share it. I’m super fun at parties.

Of course, some parents might choose to avoid the need for the Gospel according to T-Shirt altogether. Today I saw a onesie on a baby girl that said, “I’m not allowed to date ever.” Well, that solves that. Although, it probably puts a damper on that six-month-old’s romantic plans for the weekend. Of course, if her parents do decide to let her date, now or when she grows enough hair to escape that tower in the woods, there are plenty of eligible infant males out there. At least that’s the conclusion I draw based on the multitude of “chick magnet” and “stud muffin” onesies I see out there for boys.

But amongst all this cutesy sexism, a beacon of light arose. It appeared on my screen, shining like the sun, bursting with rays of rationality. It was a t-shirt, on a dad. Another list of rules for dating his daughter. But this one read, “I don’t make the rules. You don’t make the rules. She makes the rules. Her body, her rules.”

Huzzah! So, a woman can define her own boundaries and make her own decisions about her own life and body? In the great words of the wise Phoebe Buffay, “This is brand new information!”

Here’s an idea—instead of teaching young girls that they must look to the men in their lives to protect them, to make the rules, and to set the standards for them, how about we try letting them know they are capable of looking after themselves. Their rights begin and end with them. Guide them, don’t control them. Empower them, don’t overpower them. They can take care of themselves.

And please, burn the shirt.