You are here: Home / Life / Family / Why Would A GOP Staffer Shame Obama’s Daughters On Facebook?

Ahhh politics. There’s a reason most people stay away from politics at all costs. But for Sasha and Malia Obama, that’ not really a possibility anymore. So when I read about a GOP staffer shaming the girls on FACEBOOK of all places, I had a “face meet palm” kind of moment.

Elizabeth Lauten, communication director for Tennessee Republican Representative Stephen Fincher, though it prudent to use her Facebook to address her concerns about Sasha and Malia, it pains me to even write this, “lack of class” at the White House turkey pardoning this week.

You’ve probably seen the images on the internet from that day; Sasha and Malia giving their dad (a.k.a the President of the United States) sidelong glances as only teenage girls can. It was such typical teenaged behaviour and most of the world found it pretty funny.

In her spare time when @DCGopGirl is not doing work for @RepFincherTN08 she shames teenagers on Facebook pic.twitter.com/jgeuxJqlYW

Dear Sasha and Malia, I get that you’re both in those awful teen years, but you’re a part of the First Family, try showing a little class. At least respect the part you play. Then again your mother and father don’t respect their positions very much, or the nation for that matter, so I’m guessing you’re coming up a little short in the “good role model” department. Nevertheless, stretch yourself. Rise to the occasion. Act like being in the White House matters to you. Dress like you deserve respect, not a spot at the bar. And certainly don’t making faces during televised, public events.

There is so much going on here, least of which is Ms. Lauten’s own political leanings. But least get down to the nitty gritty, shall we?

“Dress like you deserve respect, not a spot at the bar.”

Really? REALLY? Are we still shaming women (of any age) based on what they choose to wear? Is that still happening? And by another woman, no less. I say shame on you Ms. Lauten. Shame on you for judging two teenaged girls for what they are wearing.

And not that it should matter, but both Malia and Sasha look like cute, teenaged girls.

Lauten did issue an apology, but never actually apologized to Sasha and Malia. She has also reportedly resigned from her position. 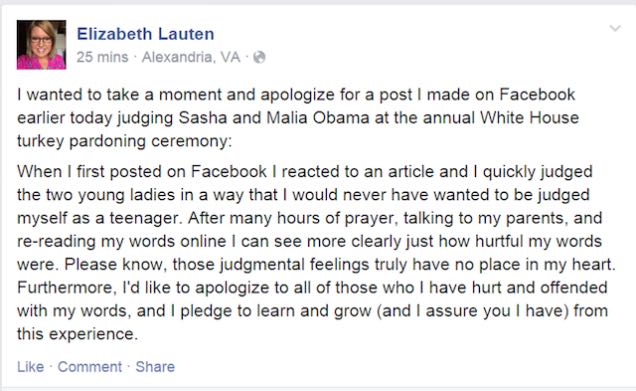