You are here: Home / Life / Holidays / We Will Remember

Like many of you today, Will and I attended a Remembrance Day ceremony. We were at Sunnybrook Veteran’s Hospital in Toronto where my step-grandfather is a resident. Not only did John serve as a member of the forces, he also painted some incredible landscapes while he was in Europe. Last year, these were donated to the National Gallery in Ottawa. As Will said this morning, Grandpa John paints really beautiful pictures. 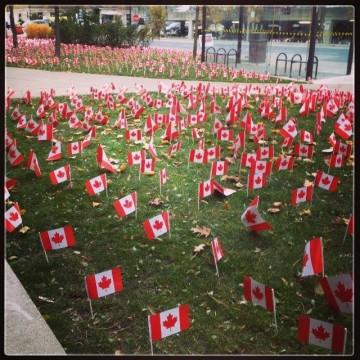 The ceremony was incredibly moving. There were some giggles, especially from my dad who laughed at a very out of tune singer, and Will elbowed him and said, ‘Grandpa, this is serious!’. We talked before we went about what would happen and why it was such an important day for everyone.

I’d love to tell you that he was riveted and learned a ton. He just coloured in the new Scooby Doo colouring book I got him for most of it and didn’t really pay attention. But he sat quietly. He sang O Canada. He made it through the whole ceremony and was incredibly well behaved. I was so proud.

I, on the other hand, WAS riveted (except in the wreath laying, I won’t lie). I couldn’t stop looking around at all these incredible men and women. The names on their wheelchairs. Anne. Wally. George. Joan. Some of them were very lucid. Many were not. I sat next to this amazing couple, still cuddling and getting their picture taken ‘for their kids’. Many sat alone.

My mind was racing. I kept thinking of their mothers. As I cuddled Will on my lap, I tried to imagine him coming to me in 11 years and telling me he had enlisted and was leaving to fight a war overseas. I tried to imagine living in a world without email and skype, where these mothers went months or years not knowing if their kids were okay. I also thought a lot of how Will’s generation will be the last to meet these World War II veterans. How it will be up to us and them to remind people of their sacrifices. As we were leaving, an older woman thanked me for bringing Will. She said it was lovely to have a child there. I was happy because I wondered if I had made a mistake bringing him.

The highlight of the morning? John McDermott was there and walked up to the mic and sang Danny Boy a capella. It was a moment. Here is a rendition that I found that was really similar.

To have him sing this and look around and see so many of these veterans wiping tears away…well I joined them. Survivors. And still after all these years, you see it in their faces. They just experienced and lived through things that we will never comprehend.

I hope we’ll have a few more years with Grandpa John to learn from him and attend these ceremonies. Hopefully a little less Scooby and a little more attention in the years ahead.