You are here: Home / Life / Family / Respect Your Elders 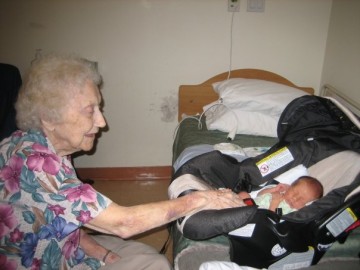 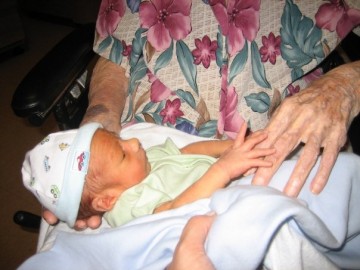 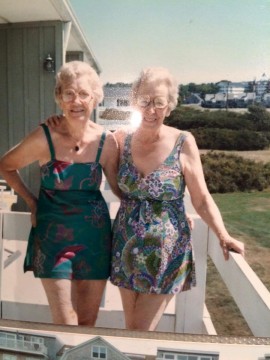 When you have a kid you get a ton of unsolicited advice. The number one bit that I got, ‘enjoy it because these times go fast.’

I can tell you when living with postpartum depression the first eight months or so, I wanted to punch everyone in the throat who said that to me. I would physically recoil. It couldn’t possibly go fast enough for me. I was praying to close my eyes and wake up when Will was thirteen.

And now that he’s seven? Well, I apologize to everyone who I tried to stare into an uncomfortable death with my glare. But it’s not just Will, it’s other anniversaries that sneak up and remind me how fast time is moving.

January 21st is one of those. It will be seven years this January 21st that my grandmother Moo Moo finally let go and passed away in her sleep. She was 103 years old. Yeah. 103 years old. I will always remember it because it was the day after President Obama delivered his inauguration speech. I imagined her 103-year-old prejudiced mind not quite being able to handle that and she decided to leave this earth to us more progressive people.

In those seven years, I’ve thought of her many, many times. To be honest, that’s not exactly what I had imagined. We weren’t exceptionally close until her later years. After my mom died, we were thrust together. Me fulfilling a promise to my mom to look after her and her giving me the attitude she used to reserve for my mom.  We eventually came to a good place together. I stopped cursing that she had lived and my mom didn’t and she started to understand that maybe she should be a bit nicer to the granddaughter who brought her coffee and gave her pedicures.

The things I remember, though, are the funny times with her. It happens like that with death. You tend to forgive the person for all the shitty things that they said to you and did to you and remember the times when you laughed together. When they amazed you. When you realized that you truly loved them, warts and all.

I loved talking to Moo Moo about things out of her realm. The internet. How I got pregnant. My ex-boyfriend who transitioned to a woman. How expensive things were—Starbucks, greeting cards, houses. I so wish that I had the conversations to play back. She loved me just showing her a powerpoint presentation! She thought I was brilliant for making the most basic of animations.

I loved talking to her about movies and TV shows. Sports. Richard Gere. The Oscars. The Young and The Restless. She was up to date on them all.

Even when she lost her hearing and we had to communicate via endless whiteboards, the conversations were deep and hilarious.

Even when she lost her mind, and our conversations were delusional, she was still curious. Still wanting to learn.

I didn’t appreciate any of this while I was in the thick of it. There were many days that I wished I didn’t have to deal with our relationship. The doctors, the hospitals, the visits, the bitching about what I was doing wrong, the endless complaining of people stealing her black pants.

Well. I wish I had followed the ‘times move so fast’ credo with my grandmother, because those eight years felt like an eternity then but looking back now, it seems that it flew by in a haze of Tim Hortons and trips to Shoppers.

So just don’t try to enjoy your kids everyday because time moves so fast, enjoy the old folks that are in their lives and yours. That time rolls by quickly as well.

Have a coffee for my grandmother today. But make it a Tim’s. Because it’s ‘ludicrous to spend more than a dollar on coffee’.