You are here: Home / Life / Holidays / My Toddler Is So Excited For Christmas—The Only Trouble Is, We’re Jewish
Share this...

Last week on the way home from preschool, my two-year-old mentioned how excited she was for Christmas. This would have been adorable, but for the fact that we are Jewish.

So I told her we don’t celebrate Christmas, that instead, we celebrate Hanukkah. She sighed the saddest little sigh and pouted the rest of the way home. Days later, it came up again—this time in the context of Santa (not coming). When her little eyes welled up, I explained that we too get presents, and spend time with family and eat yummy food, but we get our gifts from family, and not Santa Claus.

As she was only 14 months last Christmas, she remembers pretty much nothing. Her birthday party was like the first party she had ever had and trick or treating was a revelation, as was snow (if she asks me how much longer winter is going to last one more time this week, I think I might cry). Also, because she is the youngest of three (and let’s face it, a genius) she speaks in full sentences and understands what people say, but because she is only two, things like religious practices are very confusing and impossible to explain.

When I asked her teachers the next time I dropped her off about how much exposure to Christmas there had been, they said very little. But then when I walked into her classroom, it was hard not to notice that all the books on the shelf (save for one sad, boring, old-looking Hanukkah book) were Christmas themed.

The craft that week involved dipping Christmas-shaped cookie molds into paint and there was a giant plastic Santa in their playhouse area. On the other hand, she is the only Jewish kid in the class, so one book out of fifteen is pretty much the right ratio. Still, I asked if I could drop off some Hanukkah cookie molds and some dreidels and the teachers mentioned that they had some that they could dig out—it just hadn’t occurred to them because Hanukkah is so late this year (it falls on Christmas eve).

As a kid I REALLY wanted Christmas. I decorated house plants with the little ornaments we made in school and woke up a couple of years in a row hoping that maybe Santa had come, despite the fact he knew I was Jewish. As a result, my parents decided to tell me at a very young age that there is no Santa (sorry if you are just learning this for the first time) and I kept it a secret. Though two is too young for that. Even my seven-year-old believes in Santa—but that’s more because he is a giant big-mouth and would ruin everyone’s Christmas if he were to know the truth. Also, if he knows that parents lie about Santa, that might ruin the tooth fairy and then I would be really sad. 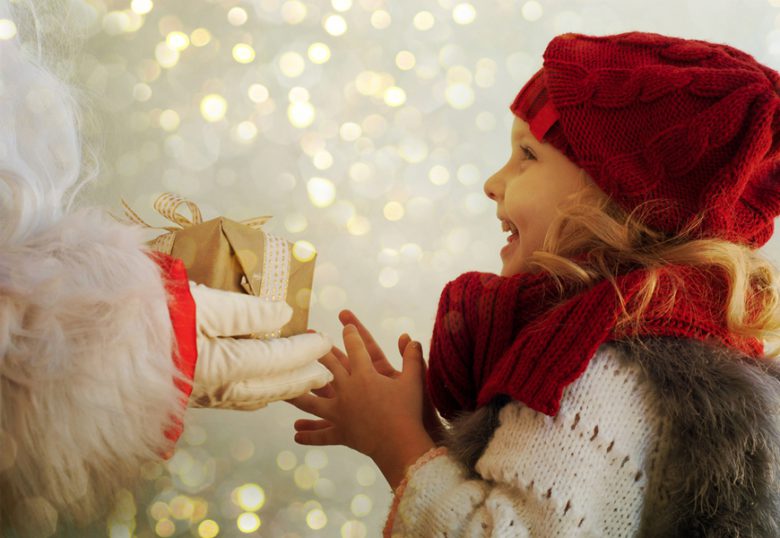 As an adult, I can take or leave Christmas. Most of it sounds like a giant hassle if I’m being honest. I mean people bring a TREE into their houses and then cover it with working lights and breakable things that also need to look pretty. I can barely get my Halloween decorations down before the first snowfall let alone set up and dismantle an entire tree in a timely manner. On the other hand, the idea of stockings has always struck me as so much fun.

I feel like I would also enjoy writing notes to Santa, putting out cookies for Santa (the grown-ups get to eat those, right?) and seeing my kids believe in magic (or whatever it is that Santa does that enables him to spend all of his time leading up to Christmas at the mall and still have all the gifts ready by deadline) Also, let’s face it—the idea of Santa watching you for weeks on end is basically the best thing that could ever happen to a parent.

I can only dream of how wonderful it would be to shut down a tantrum with a simple “Santa is watching”. I would have an elf on every shelf in my house. And an elf-cam.

The truth of the matter is that being a Jewish kid at Christmastime is not always easy. It’s hard to be different, particularly when being different involves being left out of the biggest holiday of the year. The best we can do as parents is to get them excited about Hanukkah and plow them full of Chinese food on Christmas eve (a Jewish Christmas tradition).

Over the next few days, I took out some menorahs and dreidels and we talked some more about Hanukkah. My daughter even chose some Hanukkah presents (she really wants the Peppa Pig Christmas book). When I dropped her off at preschool, I noticed that her teachers had changed the craft to decorating construction paper dreidels, which was unbelievably thoughtful and lovely of them.

Though inevitably, on the way home the topic of Christmas came up again when my daughter reminded me that Christmas is coming and that she needs to get her costume ready. And then I realized why she is so sad at the prospect of not celebrating this particular holiday. I would be heartbroken too if I thought that Christmas involved a missed opportunity to trick or treat.

“Stop making that noise, it makes me want to throw squirrels.” The sound of crackling plastic was driving my husband to the point of rodent … END_OF_DOCUMENT_TOKEN_TO_BE_REPLACED

Summer used to be magical. The hot weather, the outdoor adventures, the complete and total lack of responsibility. School was over for the year and … END_OF_DOCUMENT_TOKEN_TO_BE_REPLACED