You are here: Home / Life / Maybe There Are Angels?

Will and I are heading on vacation in ten days. We’re off to Jamaica (more on that later!) and both of us are bursting with anticipation.

It’s bizarre to me that beyond the obvious supports of friends and family, a few people can touch your life so deeply and so profoundly and then they’re gone. People like Lisa, my doula. We met four times and one of those times I was on all fours and then naked and screaming for six hours. I sent her a first birthday picture of Will and we will likely never be in touch again. But she will always be a part of our ‘story’.

Another person like that was Flora, Will’s first daycare teacher. Through Facebook, she’s seeing Will grow up and watching me become the mother she kept telling me that I was. Flora had Will for six months I think? She fell in love with him on sight and Will chose her at the same moment. She made the most difficult transition so much easier. Encouraging, supportive and the best hugger….oh and she also looked after Will.

I’m not religious but I swear she was an angel sent by my mom to fill in her void. 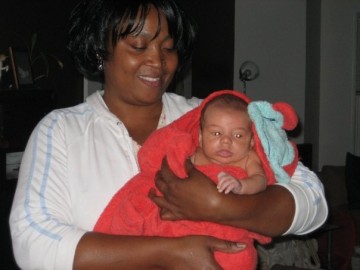 man that kid was small!

Then there is Nadia. I will likely never see Nadia again. I don’t have her phone number and I don’t know her last name. But she had such a profound effect on my life. Nadia came to work with me about 5 nights after my nervous breakdown. She slept on my couch every night with Will lying next to her in his bassinet, wrapped up like a taco. Her 6:30pm arrival was the highlight of my day as I struggled with postpartum. I can still hear her saying, ‘Why are you so sad girl? Look at this boy. He’s going to be quite a man someday.’ The month that Nadia spent her nights with us was one of the hardest of my life and she is a massive reason why we came out on the other side.

But we didn’t stay in touch. She did come to see us a year later and her smile was the broadest ever. She kept raving about how handsome Will was getting and when she left, she hugged me and said, ‘I told you you’d figure this out.’ I’m not religious but I swear she was an angel sent by my mom to fill in her void. And now she is off helping someone else figure out this whole motherhood thing.

One vivid memory I have was of Nadia and I watching the Amazing Race. There was a mother and son team on there and we were laughing that one day Will and I could be on the race. She said, ‘First you have to go to Jamaica. It’s the greatest place on earth.’ Well Nadia, we’re going. And I will hear your voice and laugh the whole time we’re there.

Who are the people that came into your life, shortly, but changed it?