You are here: Home / Entertainment / The Voice Behind The Cartoon: Total Drama’s Ella

Ever wonder who’s the voice behind some of your favourite animated characters on television? I recently had the opportunity chat with Sunday Muse who stars in Total Drama Pahkitew Island — from the wildly popular Canadian animated series, Total Drama, a parody of reality TV that premieres July 7th on the Cartoon Network and September 4th on Teletoon. With over 2.5 million viewers, Total Drama is the #1 rated show on the Cartoon Network and airs in 32 countries. Ask your kids about it!

Sunday Muse is a Toronto celebrity voice actor, author and actress. Her Total Drama character, Ella, is already a fan favourite following the recent Italian premiere. She has had roles in dozens of cartoons including Cheer Bear from the Care Bears, Saffi from Jimmy Two Shoes, Pepper from Jane & The Dragon, Baby Binky from Disney’s Emmy Award winning Rolie Polie Olie and many, many more! She’s also been on hit shows such as Bakugan, The Cat in the Hat, Franklin and Angela Anaconda.

Ella is a Disney Princess with a heart of gold and is a bit spacey when it comes to reality. She kind of lives in a fantasy. She loves to sing and talk to animals in the forest, just like Snow White.

If you were at a Karaoke bar, what would be your favourite songs to sing?

That is a  hilarious question. Hmm… I’d have to say “Endless Love”, “You’re the One That I Want” (from Grease),  and Dolly Parton’s “Nine to Five”.

Does Ella have any special powers or skills?

Indeed. She can calm an angry bear with her voice and dance with a pig. Now there’s some special powers!

Do you have a strategy on winning in this show?

The meanest one wins. Maybe.

Who’s your biggest competition on the show and why?

Sugar. First, she’s mean, and second: she’s twice the size of Ella. She knocks her out numerous times and tries to get her kicked off the show. 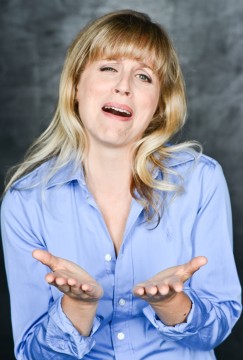 Do you see any resemblances between you and the character you play on this show?

We both love to sing, talk to animals, love nature, have an open heart and like to see the good in every person. We’re both a little sensitive, too.

Why should viewers vote for Ella to win?

She’s the only one who embraces every challenge with a smile and a song.

What would you do with 1 million dollars?

Give a part of it to my sister, buy a house in Italy, an apartment in NYC, invest the rest and use it to travel.

So, we’ve got to know, is Sunday Muse your real name?

What’s the story there?

My parents were hippies, of course and they smoked a lot of pot. They didn’t name me for something like 4 weeks after I was born. My Mom was Italian so they were going to call me Domenica, which is Sunday in Italian, and a common name in Italy. But seeing as I was born on a Sunday, they were like “let’s call her Sunday. What a beautiful name!” I think they had a real hippie dippy ‘aha’ moment.

How did you get into voice acting?

I always did characters from the time I could speak. Imitations of family members (which wasn’t hard in my family) and people on tv. I spent a lot of time practicing voices and facial expressions in the mirror. That actually paved the way to becoming a voice actor. As a teenager, I landed a sketch comedy show on YTV and then trained in the theatre, doing numerous shows and tv roles. Years ago, I submitted a cassette tape with tons of different voices on it to an agent in Toronto. He got me my first job on Disney’s Rolie Polie Olie playing the part of a baby. That is how it all began.

People will sometimes recognize me from the radio when I’m just playing myself but in cartoons, not so much. At one point, I did a spot on a Bell commercial in person as a troubled 12-year-old girl and people would have these moments when I saw them in person and say “that’s you! I didn’t recognize you with the funny voice, pigtails and glasses.”

What’s surprising for people to learn about you, and/or your voice?

I totally change when I step into character. I dig in and become absorbed by it and my characters can say some really ‘out there’ things. Most people don’t expect that when they first meet me.

Total Drama Pahkitew Island‘s one hour premiere airs on July 7th followed by a two-week summer showdown with a new episode every weeknight.