My interview with Jessica Holmes—funny woman, mom, and all-around awesome human being—begins with a joke. The Royal Canadian Air Farce cast member delivers a quip that “always gets a reaction from my kids,” with a punch line that involves Holmes making a fart noise as two tomatoes meet their maker while crossing the road.

When I ask if she’s ever performed this live, she assures me that it’s reserved just for her children, Alexa and Jordan.

“My style of humour is making fun of the fact that I excuse all my behaviour. I usually talk about how I’m training for a 1k, and how I don’t want to rush back into working out because I just had a baby…eight years ago.”

Something tells me we’re going to get along great.

The 43-year-old comedienne first became a household name back in 2003 when she joined CBC’s Royal Canadian Air Farce. There she made us giggle with her spot on Celine Dion and Liza Minnelli impressions, and later went on to host her own show: The Holmes Show. While her priorities may have changed (since becoming a mother, she’s turned motivational speaker, mental health advocate, and author), it’s obvious that Holmes still believes in the power of funny—this time around, to help others feel good.

Now, she’s back for a very special 150th-anniversary special, which promises a stellar line-up (including astronaut Chris Hadfield), plenty of laughs…and absolutely no Trump jokes.

We caught up with the funny lady for a chat about motherhood, Michael Jackson, and eating her kids’ Halloween candy…

What have you been up to since Air Farce?

I’m writing a book right now called Depression: The Comedy. I left Air Farce six years ago and that became my full-time job, dealing with my feelings. I committed myself to learning about wellness and I started to put that more in my comedy. My career now is 90 per cent live shows—either a ticketed event or me being hired by a corporation to entertain their employees.

Are you happiest when you’re live on stage?

Part of what made me want to go back to Air Farce last year was being part of a team again. I love the autonomy of being a stand-up comedian because it’s just you and the audience, and you live or die by your own creativity. For me, that’s very rewarding but it’s lonely. On Air Farce, we work together for a month to put on a show—we did that for New Year’s Eve and now again for Canada Day, and that’s perfect for an introvert like me, working two months out of the year with other people. 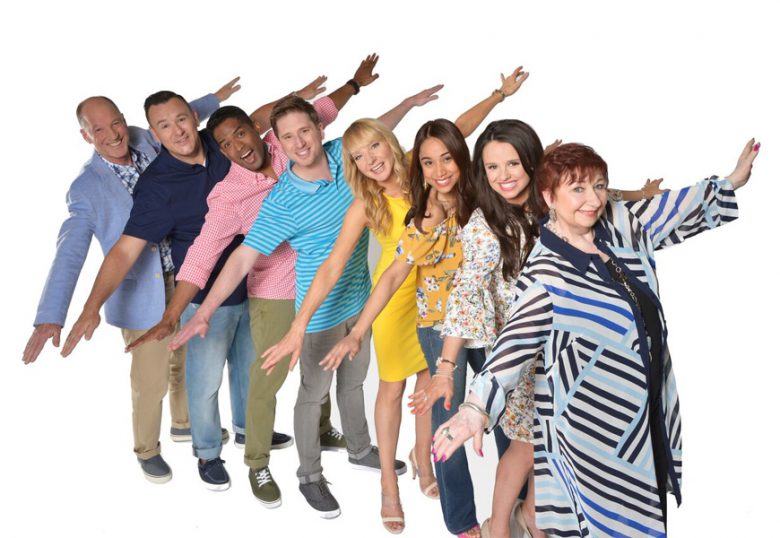 Jessica with the cast of Air Farce Canada 150

How is comedy different for women in 2017?

It used to be that if you wanted to be a comedian, that meant that you were going to perform in smoky bars around the country for the rest of your life, and that’s a lifestyle that definitely did not appeal to me as a woman. Now comedy happens mainly on the internet and there’s also the corporate comedy which I do. Now it’s an attractive option, especially for moms. I have too much dignity to go to a small bar and perform in a smoky bar for two beer tickets—that was really cool when I was 20, but not so cool when I have an eight and a 10-year-old and responsibilities! That probably made me sound over-the-hill, right?

Not at all, we totally understand wanting to be with your kids!

Exactly! I’m happiest when I’m sitting around doing nothing with my kids. Back when my kids were little babies, I could not wait to get out of the house and go perform. Any excuse to leave the house! Now, when I perform I want it to be something special. I want to get dressed up and do a good job.

I’ve been doing this for 20 years and I love my job. But there are some years that have been tougher than others—maybe less work is coming through or maybe you’re doing a lot of work but it’s not creatively fulfilling. I have felt a few times like walking away and what stopped me is the fact that I want to be a woman tearing forward with the torch in whatever little way I can. Because at the professional level, there still aren’t as many women as men. It’s made me keep going on days when I didn’t want to continue in this line of work. I’m proud to be up there representing funny women.

In 2017, with such a crazy political backdrop, does it make for better comedy?

I will say, I personally love all the late-night Trump fodder. It’s hilarious, but unfortunately, it’s probably polarising people a lot more. What I love with this Canada 150 Air Farce special, is that they decided to do zero Trump jokes and very few political jokes because they truly feel that this is a tongue in cheek tribute to Canada—a sort of roasting of our country. They didn’t want to take away from how special this celebration is for us by making it about cheap jokes.

So what can we expect from Air Farce Canada 150?

At first when I signed on I thought “Oh dear, tell me it’s not 15 period sketches!” But it’s not just about the history of Canada, it runs the gamut. For example, there’s one present day sketch about how First Nations people feel about Canada 150 and how it’s a bitter experience for them. I also play Emma Stone in a parody of La La Land where we’re singing about whether an American girl would decide to marry a Canadian guy. There’s a joke about hockey starting with a frozen horse turd. I think it’s the most creative episode we’ve ever done. Complete with many Tim Horton’s jokes… 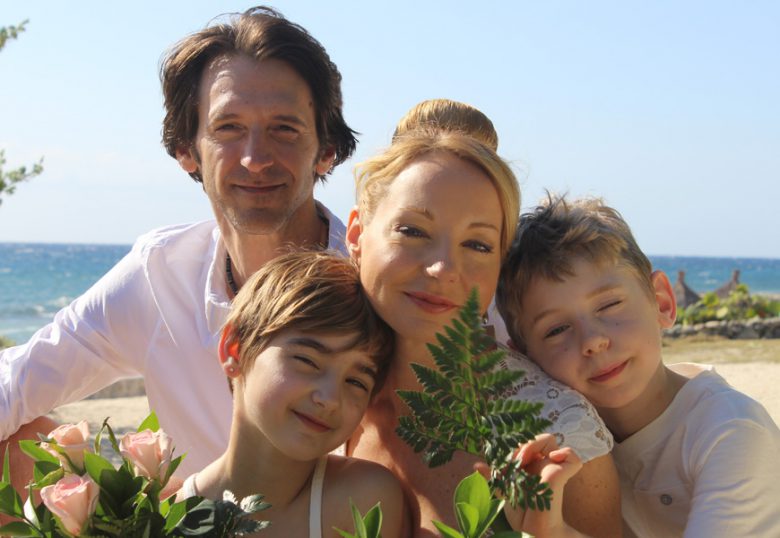 Jessica with her children, Jordan and Alexa, and her husband Scott Yaphe.

Who is your favourite person to impersonate?

The most exciting person I ever played was Michael Jackson. It felt very natural for a white woman to play him. It was literally just me finding my most playful, cool side. I think in his heart he was someone who always wanted to find the joy in things. When I play a character, I’m never trying to play what-do-we-think-of-them, I’m trying to play what they think of themselves. That’s part of why I loved playing Celine Dion, I think she knows she just has the best voice in the whole world. So for four minutes at a time I get to feel what it would be like to truly think you’re the greatest singer in the world!

As a Second City graduate, how do you apply the laws of improv to your everyday life?

The biggest law of improv is to say yes to everything. That’s a work in progress for me because I get so comfy at home and I still want to push myself to say yes to new opportunities and challenges. But I’m really proud of myself for not giving up on the book idea. I had a vision and I stuck with it and maybe only five people will buy the book and that’s okay!

Improv in life is about saying yes to all different things and rolling with the punches. The same goes for motherhood. I’m the kind of parent who says yes to a lot of things and my husband is more the guy who’s like “First off, a) that’s not safe, so ….”

Would you love your kids to follow in your footsteps and do comedy?

Definitely not! Partly because I find it hard enough with my husband and I both working evenings and weekends and both of us feeling that financially and with our schedules, every year is different. While that’s exciting for us, I wouldn’t wish that insecurity for my kids. If they came to me one day and said “I would like to do comedy” I would support them. But am I gonna plant that idea in their heads? No way, Jose!

Is there too much pressure on moms today?

Absolutely. On top of having depression, I went through postpartum depression when my babies were really little—and I remember feeling like I couldn’t win. I felt like I wasn’t measuring up to the working mom, and my peers, who were passing me by. But then I also felt self-conscious around the stay at home moms—I was out of the loop with them, I never knew what park or school program they were talking about. I was Type A before I had kids, I knew what was expected of me and I knew how to reach those goals. Then being a mom, that all goes out the window and there is no one set of rules you can follow, there’s many different perspectives and many different choices you can make. It takes a few years but every mom eventually learns that your own gut instinct and your own go-to people are all you need. You don’t need to look at what everyone is doing and compare yourself. Instead, you say “How do I feel about myself? Am I proud of the work that I’m doing as a mom?”

What is the one piece of advice you would give to moms who are struggling?

Remember that you’re not alone, remember that even people who look like they have it perfect, don’t always have it perfect. If you can be vulnerable and reach out for help and support, even the perfect-seeming moms would probably bend over backward for you. The biggest part of my PPD recovery was finding a moms group where everyone was so open and honest about sharing their struggles. “Yes, I yelled at my kid today, yes I ate two chocolate bars because my kid wouldn’t fall asleep for a nap.”

I hid my anxiety and insecurity for a long time thinking I was supposed to be keeping up with somebody, and when I was just authentic and reached out for help it made SUCH a difference. I’ve made these true soul-sister mom friends and I think it’s because we open up to each other and lean on each other.

If you had more time for one thing, what would it be?

I don’t get to go shopping. Before kids you could just say, it’s Saturday, let’s go to the mall! Now when I go, I have two kids in tow, who want to buy everything and stop at every ice cream store. If there was an extra day of the week that was just for me, I’d do more pampering and more frou-frou girl stuff.

What is your guilty pleasure?

When my kids bring home their Halloween candy they get to eat a bunch of candy on Halloween proper, but at the end of the night they pour out their bags and pick their 30 favourite pieces to eat over the next 30 days. I tell them that the rest of the candy is going to “needy” families. But the truth is, it’s in the cupboard, way high up, and that is my once a day treat!