You are here: Home / Entertainment / Introduce Your Kids To A Little Culture With The Toronto Symphony

I love bringing my kids out to experience theatre and other performing arts—it’s something that I personally love to do and I believe in balance. We need arts in our lives just as much as we need academics and sports. But I also know they are kids so as a mom, I want to offer experiences that will engage and inspire them.

The Toronto Symphony Orchestra (TSO) kept young families in mind and have created a Young People’s Concert series. it’s been running for a few years and we’ve been to several since it began. Recently, the afternoon concert that focused on percussions—you know when you have one of those A-HA moments? My 10 year old son is learning to play the drums so this “Shake, Rattle & Roll” concert was right up his alley! This time we brought his friend with us to share the experience.

Although we’ve been before, it was his friend’s first time seeing the TSO in action. His eyes lit up at first glance of Roy Thomson Hall. I had forgotten how beautiful the concert hall really is but his reaction was priceless. “Wow! Are we going in there?” he asked my son.

We had arrived just in time for a special pre-concert  performance by the Boomwhacker Orchestra. Kids and parents were gathered in the lobby area. The musicians explain to the kids that the Boomwhacker instruments are long plastic tubes cut into different sizes to make different sounds. The tubes were inspired by gift wrapping cardboard tubes. The group performed three songs including an all too familiar One Direction hit and Happy by Pharrell.

When it was time for the TSO concert we made our way inside the concert hall. There really is no bad seat in the house. Again, our guest was in awe and started asking me many questions. I quickly explained, best to my knowledge, about how the hall is designed for music and to carry sound. And that we can Google the information afterwards if he wanted. (Thank goodness for the internet).

The kids picked up the activity booklet when we had arrived. It was full of fun games and bits of information perfect for their age group… and fun paper airplane activity, too. Thank goodness they had enough sense to not to throw them!

The conductor, Evan Mitchell, introduces the afternoon’s percussions themed concert and offers a quick explanation of what we were about to experience. Today’s special guest performers included TorQ, a well known percussions ensemble who plays on classical and not-so-classical instruments like garbage cans! 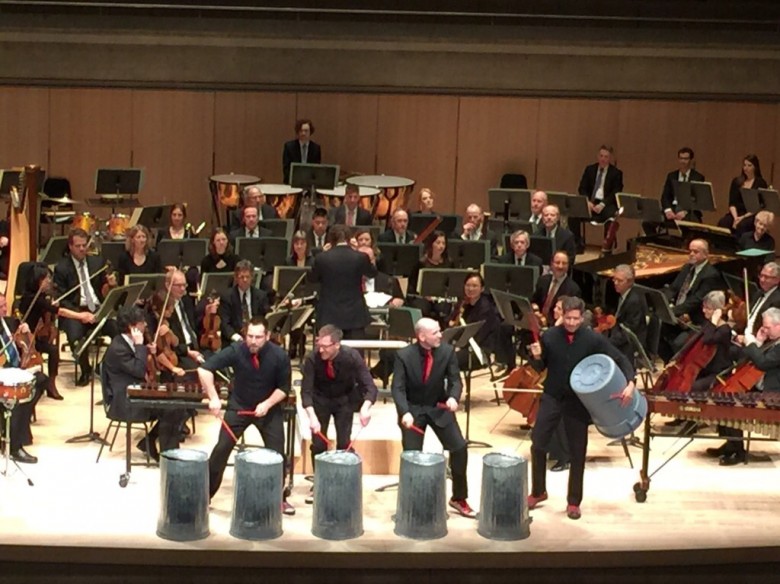 Before each song, Mitchell, or a member of TorQ, would tell the audience about the song they were going to perform and, in this concert, how percussions instruments play their important roles in the piece. The musicians all seem to love performing for the kids as they laughed and joked throughout the afternoon.

The TSO and TorQ played several orchestra favourites like Tchaikovsky’s 1812 Overture and Bernstein’s “Mambo”  from West Side Story but the kids thought it was pretty cool to see and hear the TSO also play the theme from Star Wars and wait…was that the theme to the Mario video game?

The Young People’s Concert series is a great way to introduce kids to the world of orchestral music. The concerts themselves have different themes and guest performers. Concerts are often one hour in length (no intermission). And if kids fidget during the concert… it’s okay here!

The next concert will be on Saturday May 2 (2 pm and 4 pm) with the Pan Am Games in mind as Toronto prepares to host the Games. The concert will feature Playtpus Theatre and the Toronto Symphony Orchestra together to unravel a musical mystery that highlights the Pan American culture. But make sure you arrive earlier for the pre-concert performance that will feature the Steel Pan Ensembles from Regent Park School of Music. For more information visit www.tso.ca