You are here: Home / Entertainment / Celebrity / Odd Tweets And All Things Newfoundland: Talking To Republic of Doyle’s Mark O’Brien

Actor and filmmaker Mark O’Brien is set to reprise his fan favourite role as Des Courtney during the sixth and final season of CBC’s Republic of Doyle. Audiences will also get a taste of Mark’s directorial side once again when he directs the second episode of the new season airing October 2014.

Debuting in 2010, Republic of Doyle is an award winning comedy-drama series set in St. John’s, Newfoundland. The show follows private investigator and former police officer Jake Doyle (Allan Hawco) and his father Malachy Doyle (Seán McGinley) whose cases find them involved in all sorts of dealings – not all of them on the right side of the law.

Mark’s character, Des Courtney, is a young private investigator, going from a delinquent to a valued member of Doyle & Doyle Investigations, specializing in the technological side of things.

Congrats on your Canadian Comedy Award nomination! So, we want to know… what makes you laugh?

Thanks! I’ve noticed that the things I find funny are often when there’s an awareness of comedy from the performers, without playing it for laughs. Obviously, comedy has to be played real, but I think the writer, director or performer has to be aware that the idea is funny, going into it. If you can appreciate the specific comedy of the situation, you can play it straight, knowing that the comedy will come out of that. I don’t think any comedic actor just happens to be funny, even when they’re playing it straight. There has to be an understanding of it. 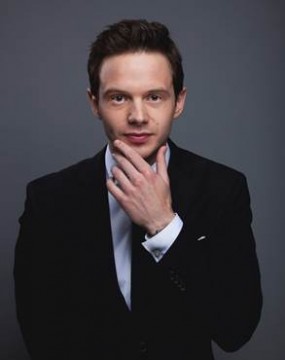 I love Seinfeld. To this day I still watch that show every time I catch it on TV. And I find myself quoting the most mundane of lines from that show. I grew up watching it, much like the first seven or eight seasons of The Simpsons. I’m also a big fan of Conan O’Brien, Woody Allen, Louis CK and Dave Chapelle. Chapelle’s Show I watched religiously before it ended. My favourite comedy film would probably have to be The Big Lebowksi or Unfaithfully Yours. But there have been so many things that make me laugh. I also love all those old Leslie Nielson flicks — Wrongfully Accused, Spy Hard, The Naked Gun. The idea of how silly it is sometimes makes me laugh harder than the joke itself.

You play the role of Des Courtney, a young Private Investigator that has a knack for tech. So, are you techy in real life?

Do you have a favourite gadget and are you attached to your smart phone?

I’m not a big gadget guy. I’m kind of old fashioned with technology. Like most of us, I guess I’m pretty attached to my phone. I think, for me, I’ve become attached to it because I spend so much time around people, who in mid conversation, get a message or an email and spend five minutes reading and replying. Then I’m left with nothing to do but look at my phone as well. Except, I’m normally just pretending to look like I have an email to write, when really I’m looking at twitter or something.

There’s this comedian, Chris D’Eila. He’s pretty good on there. I also like Andy Richter. My buddy Mark Critch also has his moments.

Social media has changed how we get our news, gossip, etc and how you connect with your fans. Do you have any funny twitter stories?

Twitter is amazing to me. I really like it, but it’s also an odd forum. People have open access to say ANYTHING they want to you, which will be shared around the world. I’ve gotten some odd tweets for sure. I played a character on Hannibal this past season named Randall Tier, and there’s a Randall Tier twitter account now. He tweets at me pretty often and uses an old picture of me mixed with some kind of flower around my head, and tweets things no linguistic psychologist could break down.

My short film Better People won Best Short Film and I did not see that coming.

You’ve acted and directed on the award-winning comedy-drama series Republic of Doyle, how did going from acting to directing happen on this particular show?

I’ve been directing for years. But small format kinda stuff — short films mostly. But since a young age I’ve been wanting to direct — longer than I’ve wanted to act actually. When I’m on set I’m always watching, listening and learning. It’s the greatest film school there is! I expressed an interest to the producers of the show several seasons ago. They were very helpful and encouraging and I started off shadowing, directing second unit footage, etc. Then, this year, they gave me the go ahead to direct my own episode.

You were born and raised in St. John’s Newfoundland, right? What are three things that you want the rest of Canada (er..or the world) know about Newfoundland?

1) It’s pronounced ‘New-fin-land’2) We prefer not to be called ‘Newfies’3) Newfoundlanders love greeting people who come to visit and showing them a good time. We really take pride in that. And it is truly unlike anywhere else. There’s a warmth, beauty and down to earth quality to this place and its people.

So, how about those film festivals? Love or hate, or necessary evil? Any favourites that you’ve experienced?

I love film festivals! Every festival I’ve gone to I always think about how much work it must be to put on one of these things. It’s an incredible undertaking, so that artists can exhibit their work, learn more about film and meet other film-makers. I don’t think they’re entirely necessary per se, but certainly very helpful in getting your name out there, gaining experience and seeing what other people are doing that isn’t at your local theatre. I guess my best experience was at the 2012 Atlantic Film Festival in Halifax. My short film Better People won Best Short Film and I did not see that coming. It was a huge honour from a wonderful festival. That film did a very nice festival circuit. I took that film to the Independent Film Festival of Boston and that was a cool experience as well.

Oh, definitely books! I don’t know if I’ll ever do the iPad thing.

What are you reading now? And what’s on your list of must-reads?

I just started reading Murder of the Century by Paul Collins. Next up is American Cinema by Andrew Sarris and Red Harvest by Dashiell Hammett.

Your favourite quote to get you through life?

Your passion will inform you.