You are here: Home / Entertainment / Celebrity / Backstage with 98 Degrees

98 Degrees are back! With a new album called “2.0“, a new single called “Microphone” and a new North American tour called “The Package”.  I met with the band last week  just hours before they were set to hit the stage at the Air Canada Centre as part of their tour with NKOTB and Boyz II Men. 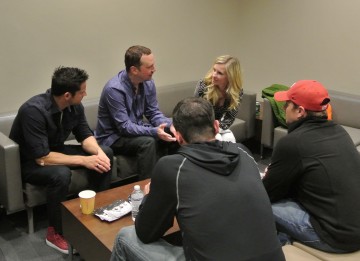 My  interview was booked a month ago which left me with plenty of time to do a little investigating by asking female friends who I knew are huge fans of the band, what they most wanted to know. After the usual “Oh My God!!! You’re going to speak with 98 Degrees??? Oh My God!!!”, everyone said “I wanna know what the hell took them so long!”

As many of their devoted fans know, the band’s last album of new material came out back in 2000.  Since then, Justin Jeffre, Jeff Timmons and brothers Nick and Drew Lachey pursued their own goals – both personal and professional.

So when I met with them, that was the first question I asked. The foursome are very friendly, truly gracious, have a great sense of humour and are excited to be back on stage. We talked about their new album,  how they view success today and what it’s like to tour with their young families in tow.

What took you so long?

Justin: I think everybody just got busy with life. We never expected the break to last this long. Then these guys got married and started having kids and then doing different projects. It’s a big commitment to come back together. You really have to set aside about a year maybe a year and a half. It’s something that the timing wasn’t right until now and also helped that pop music has come back around and atmosphere just seemed right and things [were] just meant to come together.
What does it feel like to perform again after 10 years?
Justin: It really kind of was like riding a bike, I think we were really surprised the first time we got together and started singing together how quickly the blend and everything just seemed natural. It seemed like we never lost a beat there. The only difference is that we’re a little older, our fans are a little older but it’s still that same kind of experience. 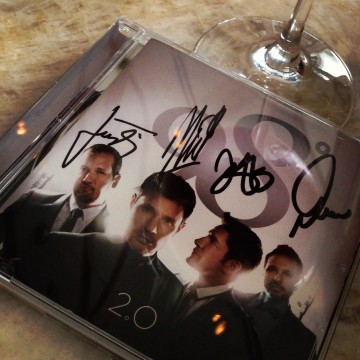 How has your music changed since the last album?

Drew: That was the delicate balance that we had to find when making new music. How do we keep that 98 Degrees sound that people enjoy and love and make it current in today’s music scene? We were able to find songs that focused on us vocally allowed us to incorporate our harmonies – which is what makes us unique – and update the productions, the sounds and the song content.
We’re going through such a resurgence of “boy bands” right now. Why do you think that is?
Drew: I think that’s just the music business in general. It goes in cycles. It kind of rotates and the acts that are able to make it from one cycle to the next are the ones that last. I think music today is more music-based rather than artist-based. The fans aren’t as interested in the actual artist. They’re just going from song to song to song. For us coming back now…we came from a time when people were actually invested in the artist singing the song.  I think that’s why you see us and New Kids and Boyz II Men having such a good run here on “The Package” tour. It’s because people liked the groups, not just the song.
Tell me about “The Package”. Who came up with the name?
Nick: It came from Donnie [Wahlberg] in New Kids. But I think all puns aside, it really truly is a very appropriate name because it truly is a ‘package’. It’s a great show. All three groups complement one another and it’s memorable.  Let’s be honest, most of the women out in the audience are women who grew up – in one form or another – with us. So it’s a great package of entertainment and why we’re so honoured and flattered to be a part of tonight’s bill. 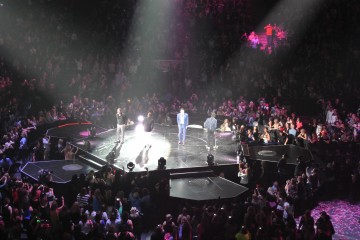 What can people expect to see during the show?

Jeff:  We’ve created a great, concise, cool 40-minute show that has a lot of punch to it. It’s just full of energy and we try to deliver it every night no matter how tired we are, no matter what goes on throughout the day. We definitely find a way to get our energy up for the show and so far it’s been very well-received.
Do you view success differently now than you did when you started?
Jeff: One hundred percent. Not that we took it for granted before, but we didn’t get to enjoy it. We were so young, we were working so hard, everything was happening so fast. We weren’t exactly surrounded by the best people at all times. Now we’re older, things have happened – good and bad – in all of our lives. We look at it a little bit differently. You tend to just relish every moment. [The fact] that  you have an opportunity to be on a tour like this, to be able to come back to different countries like Canada and come back to Toronto which is one of our favourite cities. 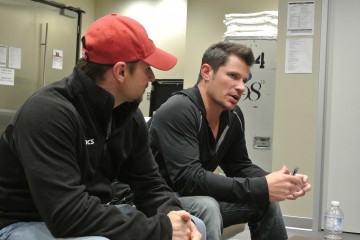 What are your favourite things to do with your families when you’re not working?

Drew: My daughter loves dance and performing so a lot of what we do is around that. Whether it’s dance classes or going to see shows it’s a normal life, honestly. Soccer practice and dance class. I host a radio show sometimes and her friends come up to her and say “I heard your dad on the radio” and she’s like “what?” She doesn’t care –  it’s just a normal life.
Touring with your families has got to be different.
Drew: It definitely changes the dynamic, but it also gives you a sense of being grounded. It’s very easy to get swept up in what’s exciting and popular out on tour and having fun and all that. But when you have your family there you’re able to keep perspective and be grounded, keep your values there and what’s important. Definitely gives you a different perspective. It’s like a summer vacation for your entire family. 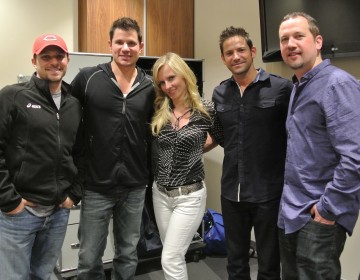 Your kids are going to have the best photo albums by the time they grow up
Drew: I’m getting my daughter a camera so she can go around and take as many pictures as she wants.
Are your families able to see Toronto when they’re here?
Nick: Well they’re out in Yorkville right now shopping. I’ve not seen them all day. They’re livin’ it up!
Jeff: We rolled in, have done press all day, have an hour rest on the bus now we’re back here getting ready for the show and doing some interviews.
Nick: [slyly] Everywhere we go, it’s 98 Degrees! [we all groan and laugh]
Drew: [shakes his head] Oh Dear God
Seriously, how can you not love these guys?
If you missed “The Package” tour on June 9th in Toronto, you have another chance on July 28th or on July 10th in Vancouver.
[youtube id=”vmCJguRGXyA”]