You are here: Home / Entertainment / Book Club / Book Review: “The Girl On The Train” By Paula Hawkins

I watch people with the same kind of fascinated horror that I view a car wreck. I don’t intend to stare, but I just can’t seem to tear my eyes away from the catastrophe that is in front of me. Perhaps it’s human nature; I am naturally drawn to the drama of others because it reminds me that my life, despite its ups and downs, could be a whole heck of a lot worse.

Now I’m certainly not saying that I find amusement in other people’s misfortunes. I’m a creative writing teacher and a writer: What I’m saying is that every single thing you need to know about character development can be discovered through people-watching. Need a great idea for a character? Try spending a couple of hours on public transport or in an airport—voila! The characters present themselves.

Take last Friday, for example. I was waiting to catch a flight out of the arctic freeze that is Northeastern Winter 2015, when I witnessed a woman lick the entire length of her hand before smoothing down her hair. Boom. There it is. My seatmate on the airplane? A young man from Boondocks Northern Ontario guzzling beer at a dangerous, yet well-practised speed. His profession? (I asked out of curiosity because really, what does a person do that far north of the equator?) Gold mining. I’m not making this stuff up.

So there you have it. In my head, Gold Miner leaves Boondocks in search of a job above ground. He meets Hand Licker in a bar and is mesmerized by her ultra-smooth hair. They hit it off on the dance floor, but then argue over Canadian vs. American beer. One starts crying; the other storms out. Life at sea level is just too complicated, concludes the Gold Miner. You get the idea. 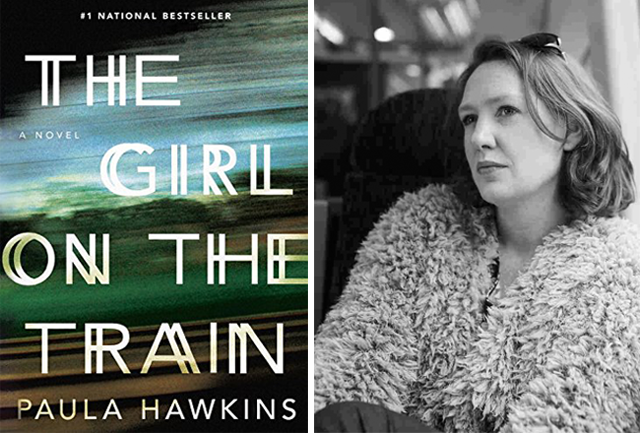 Rachel, in The Girl on the Train, loves to people watch. It passes the time on her commute to London, and because the train makes frequent stops, she has the vantage point of looking right inside yards and windows (curtains are so over-rated). There’s one couple in particular that intrigue her. She’s given them names, jobs, relationship issues, thoughts, emotions and hobbies. They are, to Rachel, the perfect couple, which is why Rachel is so offended when she witnesses the wife kissing another man. How dare she cheat on us, thinks Rachel.

But then the not-so-perfect wife goes missing and Rachel convinces herself that she holds the key to solving the case. Rachel inserts herself into the police investigation with the story of a mystery lover. Too bad Rachel turns out to be an unreliable witness, but that’s the assumption police make about a drunk, unemployed, obsessive person who can’t stay away from her ex-husband’s new family.

Rachel is insulted but not deterred by the police’s lack of interest in her claim. Her new plan? Befriend the perfect husband. She already “knows” everything about him, after all. She’s certain that he’ll take her seriously. Now if she can just remember to call him by his real name….

The Girl on the Train is a nonstop ride told by Rachel and Megan, the not-so-perfect wife. Reminiscent in style to Gillian Flynn’s Gone Girl, it will keep you reading and guessing until the end.

Paula Hawkins is a former journalist. The Girl on the Train is her first thriller. Penguin Random House 2015.