🙂 hai (thats how we greet each other nowadays) i figured it was time i did a review of a great movie. Warm Bodies its a mixture of zombie and rom-com. now how could anyone say no to that!!?

the producers of the movie describe it this way: WARM BODIES is a funny new twist on a classic love story about a zombie and a human survivor who form a special relationship in their struggle for survival.

the classic love story that gets “twisted” in Warm Bodies (as even i could figure out) is Romeo and Juliet – like two kids from totally different worlds who fall in love? and the twist is that the boy in this “boy meets girl” flick is actually — uh, how do you put it delicately? dead. actually, to be more specific he’s a zombie. the movie is set in post-apocalypse America (zombie apocalypse of course, my mom tells me that movies about something called a nuclear apocalypse were popular when she was a teenager). 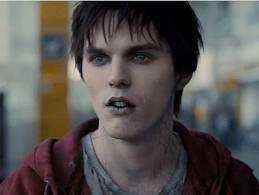 The boy’s name is R.

the boy (his name is just “R” because he can’t remember his pre-zombie name but he knows it starts with “Rrrrrr…”) and girl (Julie) meet under pretty grisly circumstances, but eventually one thing leads to another and then it’s like two hearts beat as one. wait a minute? two hearts? hold on – zombies don’t have heart beats…but this one does.

this movie has a three awesome things going for it. first, it’s romantic, and who doesn’t love a little romance? second, it’s funny. like the opening lines, “what am i doing with my life? i’m so pale…i should get out more.” lol! third, it’s about zombies. i love zombies. you love zombies. everyone loves zombies.

WARM BODIES is a funny new twist on a classic love story.

and don’t pass on this movie just because you find zombies scary – even the “bonies” (the really far-gone zombies in this movie) aren’t as much scary as they are menacing. there’s also not much in the way of goriness. the film is rated 14A but younger kids who aren’t too easily scared would be fine.

but don’t just take it from me…check out the first four minutes of the film here:

oh and an interesting fact: the two main characters, R and Julie, are both played by foreign actors. Teresa Palmer (Julie) was born in Australia, and Nicholas Hoult (who my mom insists looks like a young Tom Cruise – ew) was born in England. both actors pull off flawless american accents.