You are here: Home / Reviews / Movies / Is Venice a Dream?

“Oh, Sonya, you’ve got to go to Venice,” says my mother-in-law. “It’s so beautiful and you’ll be so inspired for your art. The people are warm and friendly. You must go one day.”

Venice is somewhere that hasn’t really been on the top of my list. I’ve been disappointed in major tourist destinations in the past.  I mean, the places where you see groups marching together with matching buttons and a flag-waving tour guide leading them to the next rum bar or chocolate factory. Been there. It’s not my bag. Venice is the 11th most frequented stop in the world by some of the largest cruise ship companies. Being a tourist staying close to a cruise ship port sheds a whole new light on travel for me and hubby. Don’t get me wrong, cruise ships are great – there’s a time and a place. We’ve never been ones to support pre-booked tours on a ship but have opted to put our tourist dollars directly in the hands of the locals who have never disappointed us in providing genuine and personal land tours. But the vibe of any port changes when one of those honkin’ big ass vessels park themselves. The people change. The ambience changes. But I get it. It’s their only source of income. Whether by cruise ship or tour bus, the tourists come in fast and leave even faster these days. 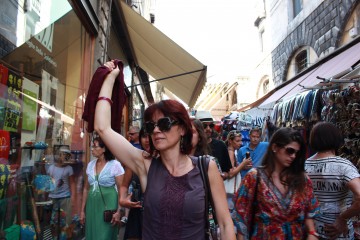 For me, that kind of travel is just not so appealing. You just don’t get a feel for the people or the culture and you definitely don’t get the experience you should.

Andreas Pichler’s documentary, VENICE SYNDROME , shows just how mega tourism has impacted the people and the city in which they live.

Venice lives under the enormous pressure of mass tourism. It’s all romantic to the eye of the tourist and the locals willingly, and knowingly, strive to keep that dream alive but the city is at it’s tipping point. With no infrastructure and the outrageous costs of restoration, locals are being forced to live beside the dream. There are approximately 58,000 living in Venice — a city that sees just as many tourists on any given day. And according to one study, there will be no more Venetians by the year 2030. 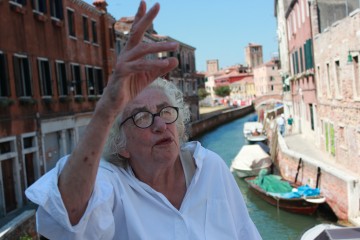 Venice Syndrome – Tudi Sammartini lives in one of the few neighbourhoods that resembles old Venice. She is descended from Venetian nobility, but doesn’t live that way. She even waived her inheritance relating to the Palazzo on the Canale Grande. Tudy even rents out space to tourists in her apartment to afford to continue living their herself. Photo Credit: Venedig-Prinzip/vkpr

With no post office (bought by the Benetton group in 2010) and other diminishing public services, Venetians are being forced to move to the mainland. However, handfuls of elderly remain and are determined to stay until they die. In their own words “by then, it doesn’t really matter.”

This documentary sheds a realistic light onto one of the world’s most popular tourist attractions.  It’s a city that is crumbling in front of it’s own eyes. Restorations are only bandaid solutions and there’s a feeling of “enjoy it while it’s still there” because one day it will vanish. It’s in a vicious circle of needing tourism dollars to sustain it and making money as fast as they can but even the souvenir shops don’t often carry locally made merchandise anymore. It’s the unfortunate costs of working the dream machine.

I’m not sure what can be done or how things could change. I did get the feeling that while the residents of Venice hopes that when we do visit, we make sure to take the time to experience it the way it should be experienced. And I will some day.

Yes, take your photos but put down the camera once in a while and savour it…. It’s not a theme park afterall.

VENICE SYNDROME opens on Friday, July 26 at the Bloor Hot Docs Cinema in Toronto and the Cinema du Parc in Montreal.