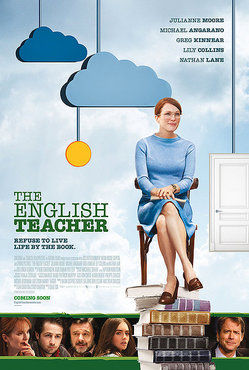 Linda Sinclair (Julianne Moore) is forty five-years old, prim and proper, loves classic literature and is – you guessed it – a high school English teacher. Single and living alone, Linda’s most significant relationships are with her students and with the characters in the books she reads.

One day, her former student Jason Sherwood (Michael Angarano) re-appears in town. Now  twenty-six, Jason is disheartened by his unsuccessful attempts to become a playwright in New York. After reading Jason’s thesis play, Linda is touched and inspired. Along with her school’s drama teacher (played by Nathan Lane), Linda steps out of her comfort zone and decides to mount the play at her school.
Since this is a comedy, not all goes according to plan. Despite her better judgement, Linda has a fling with Jason and her life turns from perfect order to perfect chaos.
While the plot is predictable this is a pleasant little comedy with a bit of pep. It’s not trying to be deep or satirical. It’s just trying to entertain you. Julianne Moore is always good and here she is a different character than we’ve seen her play most recently. The cast is filled with many other likable actors, including Greg Kinnear as Jason’s father.
The English Teacher is a nice light film to catch with your girlfriends – especially if you’re looking for an alternative to summer blockbusters filled with superheroes or special effects.
The English Teacher opens nation-wide today.
[youtube id=”a4mX-qMKwLU”]