You are here: Home / Reviews / Books / Teach And Giggle

These two new picture books introduce some things to think about wrapped in fun and funny  – spoonfuls of sugar, you might say. 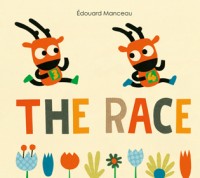 The Race, by Edouard Manceau

A group of creatures have assembled for a race. Things quickly become a little different from a real race – there are never banana peels thrown during the Olympics, I’m pretty sure , nor are trucks or kites employed to increase speed. it’s pretty silly, and the creatures are adorable, so they only add to the comedic sense, but at the same time… there’s something else happening. There’s a guy who starts wondering why he even started running, and leaves the race to start something else while the others keep trying to beat each other through one trick or another, and in the end? Well, another guy is said to have one, but as the book notes, “that’s just what they say.”

I am loving how gently and easily this sneaky little lesson on enjoying life and not following the herd is tucked into a story filled with bold colours, funny little moments, and an incredibly cute crew of unspecified beasties. Unlike so many other stories with a message, it doesn’t take away the enjoyment at all, and only even really makes itself known at the very end. meanwhile, there is much to talk about and the illustrations are really wonderful, made of the kind of bright collages that signal fromt he get-go that this is a light-hearted kids’ book. 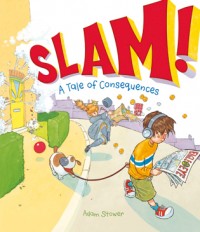 Slam! A Tale of Consequences, by Adam Stower

A young boy leaves his house to run an errand and walk his dog. Headphones on, reading the paper as he walks, he’s in his own world, and doesn’t notice someone ask him not to slam the door. He also doesn’t notice that that causes a ball to fall off the roof, or that the cat leaps onto a passerby when it falls on him, or the truck crash that follows that… As he goes, a chain reaction creates complete mayhem behind him, with some very funny results to be found by the sharp-eyed reader.

There is, indeed, a little bit of a lesson about paying attention and about being responsible for what you cause, but it’s one that isn’t really articulated directly, entirely avoiding any hint of preaching, and it’s wrapped in a funny little series of consequences that is truly amusing and full of the kind of detail that encourages repeated reading to pore over them thoroughly. The illustrations are marvelous, not only for the detail, but also for the facial expressions and fantastic comic style. If you’ve got a kid who loves studying detailed images and finding new things, as well as one with a sense of humour, this is a great one, and it also reminds me of another book with a similar series of events that is equally packed with comic detail, Once Upon a Banana Peel.

You know what’s another good lesson? This one on teaching kids about the cost of things from Sara!