You are here: Home / Reviews / Books / Mutant Mania: X-Men Comics Are A Can’t-Miss
Share this...

I’m a bit of an X-Men fan, so you can bet I was out at the new movie a couple of weeks ago when it came out. That movie, Days of Future Past, is based on a comic series, and I’m told that I need to read Age of Apocalypse to figure out what the total outcome will be. Which means I’m headed to the shelves, because I really quite enjoy the X-Men comics.

Marvel’s got a great publishing programme, where they bind up a few comic books together in a graphic novel format, something I’ve read a bunch of. It’s a great way to be able to follow larger story arcs, and they do this for the X-Men comics, so I’ve actually read more of them than I might have if they weren’t so handy because getting your hands on comics can be difficult. If you’ve got a comics fan in your house, I definitely recommend these as a way to catch up on stuff they may have missed or introduce a new series.

We (librarians, of course!) often have parents ask how to get their reluctant reader to read actual novel. Well, first of all, let me just put it out there that reading graphics is still reading, but yes, we also take your point that following a sustained narrative with interest and comprehension is an important skill, and certainly one that will make their English teachers happy, so. Let me tell you a little secret. There are novels that are just as exciting and even follow some of the same themes. There’s the obvious — actual X-Men novelizations, like the ones based on Joss Whedon’s story arc from The Astonishing X-Men, called Gifted. This one is written by Peter David, who is an author and comic book writer in his own right, so he’s got the right cred to handle this.

I call this a bridge — it’s still connected to what they know they like, and is in their comfort zone, but it’s heading toward new territory at the same time.  The novel above? One foot on the bridge. The next step might be something with action and mutants, even a world filled with human/mutant conflict, but in a different world than the X-men, somewhere outside of the Marvel universe. Oh, fine, you might say, but where do I find that? 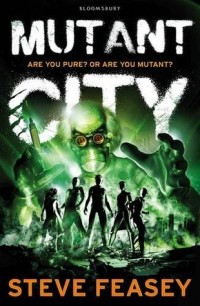 After the Last War, the citizens came out of the subterranean arks in  cities and began to rebuild with the technology they had brought with them underground. To their shock, things on  the surface had survived,  and they also had to fortify their cities to keep out the mutants and figure out how to deal with them. Ghettos sprang up outside city walls, where “mute” society took hold, and agitation for rights began. In all of this,. one man began to experiment with designing hybrid babies, human, but with unusual mutant powers. This lab was shut down, destroyed, and only a few people ever knew of it… until now.

With the man responsible, the president, on his death bed and his son set to take over, the secret is passed on, and the president wants one of the mutants back for his healing power, the rest destroyed as a threat to his son and his legacy. These five hybrids and the man who destroyed the lab have their own plan to save themselves and help all mutants, however, and it involves getting into the city…

This series opener packs action, suspense, and a premise that makes the cliffhanger ending mean waiting impatiently for book #2.

“Stop making that noise, it makes me want to throw squirrels.” The sound of crackling plastic was driving my husband to the point of rodent … END_OF_DOCUMENT_TOKEN_TO_BE_REPLACED

Summer used to be magical. The hot weather, the outdoor adventures, the complete and total lack of responsibility. School was over for the year and … END_OF_DOCUMENT_TOKEN_TO_BE_REPLACED