You are here: Home / Reviews / Books / Creation and Survival

Creating and Survival and major themes in these two new YA novels coming out this month – though the two are very different, they ask some interesting questions about what could be.

When Sophie receives an urgent email asking her to come and help her mom at her top-secret, isolated lab, she is on the first flight. Her mom has never put her first, and she sees a chance to connect, so she flies to her childhood home in Guam, and enlists a long-lost friend to fly her to the island, where no other pilot would go. Once there, things start going wrong immediately, and soon she discovers a lot more than she bargained for about who her mom is, what she does, and who Sophie herself is.

This is action-packed, full of twists and surprises, and based on a premise that throws open a lot of questions about creation, science, psychology, and free will. Yes, that’s a lot to be packed into what is ostensibly an action book, but it adds some nice tingly shock value, and gives it a little extra meat for those readers who want to sit down with an idea and toss it around as well as enjoying the constant danger, escapes, and recaptures. Pure adrenaline may be a lot of fun, but I admit I enjoy when an author also puts a little more in like this.

The Rule of Three, by Eric Walters 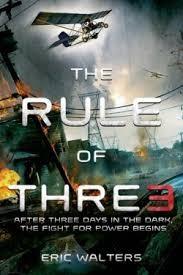 A person can last 3 minutes without air, three days without water, 3 weeks without food. So begins the jacket copy of this new Eric Walters book, all about what happens after a mysterious event takes out every computer on earth. Fortunately for 16-year-old Adam, his mother is a police captain, a friend of his lives on a farm, and his neighbour is retired from some sort of shadowy government secret ops work and knows way more than most people about survival and psychology in tenuous situations, so we are seeing the optimal possibility for surviving, defending, and building a new community as we follow their story.

The action starts right away in this book, and tension builds throughout as needs grow and people’s desperation mounts, just as the neighbour predicts, making for a good read that’s hard to put down. I asked Eric Walters last year how he got the psychology of reactions so right in some of his disaster novels and found out he has a background in the field, which is much on display and well-handled here, making that aspect of the novel more realistic. My only complaint is that the ending is not really the end, but not does it feel like a point where you can see the story run from there – which leads me to hope we’ll be seeing a sequel pick up the story at some point, because it’s a solid, interesting read and I’d like to know more of the story!