You are here: Home / Reviews / Books / Book Review: The Secret Language of Doctors

In my family, there have been times that we’ve rushed over to the hospital in some sort of emergency. We all know the routine. We get assessed by a triage nurse and then we wait. And we wait. Unless we’re oozing blood we know that heading to almost any hospital in a big city means waiting, and sometimes for hours. I am the type of person that doesn’t want to come across as a bother to anyone. But one time I had a serious bout of food poisoning that was mis-diagnosed twice as stomach flu.

I vividly remember being waved away from our nearest walk in clinic with some antibiotics in hand but within 24 hours I was in isolation at the hospital. I was quiet and my body was exhausted when I checked myself in. I went through the series of questions at triage. “You probably have a bad case of stomach flu” was the reaction, again. But they agreed to do some testing and sent me off to the washroom. Well, they soon realize that I wasn’t  high maintenance and everyone went into swift action. I was isolated and nurses/doctors suddenly started wearing hazard suits before they came near me. It was determined that I had Campyloblacter — a food poisoning on par with E.Coli and Samonella. It causes flu like symptoms but I had also lost weight and it caused damage to my intestines.

What was interesting to me during that particular visit to the hospital was the way the staff communicated to each other. It wasn’t the first time I had noticed doctors talk in code. In fact, I’m sure doctors and nurses used code names for me when I had baby #1! That was an entirely different scenario. I was not quiet and yes, overwhelmed and not wanting to leave the hospital. I am sure they called me “Princess” several times. 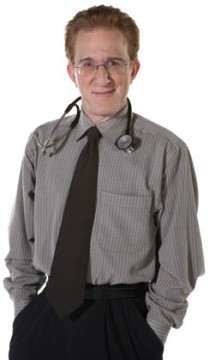 The Secret Language of Doctors, written by Dr. Brian Goldman, is a peek behind the scenes inside a hospital, into what doctors commonly refer to as “the bunker” (where  it’s common for you and I to be assessed and labelled). It’s a revealing, yet informative read, about how doctors communicate. Some terms like “Code Blue” has seeped into mainstream recognition as a common announcement indicating that a patient is in need of immediate resuscitation or medical attention. Other terms mentioned in this book, are not as common for us, but provide insight into how hospital staff quickly and efficiently understand a situation… and why they cringe when they hear “Code Brown.”

The book is entertaining and sometimes shocking. The title speaks for itself. I won’t give anything away except that Dr. Goldman does explain that the medical slang can help get through frustrating and exhausting times… and it is also a way for doctors to bond. While I don’t think he’s revealed all of the slang terms, there are some funny (and yes, sometimes crude) terms that are used on a daily basis. If you want to know who’s labelled as a cockroach or a beemer or what GOMER means, you’ll definitely want to read this.  My big take away from reading this is a more appreciation and understanding for this line of work. I know my ears will be perked the next time I need to visit the hospital, although I am hoping that won’t come too soon!

If you’re wondering what the doctors think about your dramatic entrance for emergency care, you’ll want to read this.

For more than 20 years, Dr. Brian Goldman has been a highly regarded emergency physician at Toronto’s Mount Sinai Hospital. He also lends his medical expertise into an award-winning medical journalism career with CBC Radio One’s “house doctor” and the host of the program White Coat, Black Art.

Dr. Goldman is also author of the best-selling book, The Night Shift.

The Secret Language of Doctors is published by Harper Collins Canada.