Cats are so weird.

Take my cat Leo, for example. Every morning I spend several minutes realigning throw rugs and straightening couch pillows in order to tidy up from his 4:00am wild tear around the house. Of course Leo is sound asleep (in the dog bed) when I’m awake, so I make sure to nudge him a bit with my toe whenever I walk by.

And then there’s the yowling. Leo does not meow, he yowls. I’m convinced it’s an attempt to live up to his name as if he is a direct descendent from the Lion King or something. Naturally, the yowling accompanies the crazed race and rug surfing that occurs at 4:00am. We love him.

My parents once had a cat who could force himself to throw up. No lie. Amanee had a Saturday morning ritual that he followed religiously. He’d wake up, hungry, and stroll up to my dad’s head where he’d knead his hair and purr. If that didn’t rouse dad, he’d sit on his chest for a while and drool. No response? Look how far those glasses and that lip balm can fly off the bedside table. Still nothing? Time to barf under the bed, right in the middle of the floor where it’s nearly unreachable. Yep, that did it. Breakfast time! Wahoo!

This ritual happened every Saturday morning. You’d think my parents would’ve learned to jump out of bed as soon as they felt Amanee’s first step in their direction. Dad always says that cats have “walnut-sized brains,” but clearly he’s mistaken; they are, in fact, brilliant little manipulators. 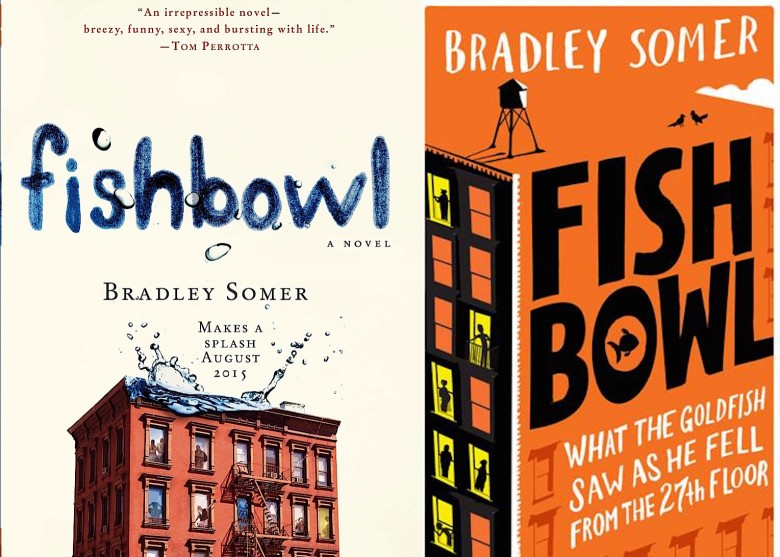 Bradley Somer’s novel Fishbowl is the story of Ian’s plunge. Ian spends some of the four seconds that it takes to fall to earth contemplating the meaning of life—as much as a fish with an atom-sized brain can contemplate, that is. The majority of the four seconds he spends looking in window after window, floor after floor. Through those windows lies the true story.

Connor Radley, Ian’s owner and top-floor inhabitant, is the resident stud. Too handsome for his own good, he doesn’t recognize love when it’s right in front of him. He has no issues recognizing a fun time, however.

Garth, a construction worker from floor 25, is paranoid that his deepest secret might be revealed. Other people may see red when they’re angry; Garth sees red as carmine.

Claire, the agoraphobe from floor 8, gets paid to call men “Pigs.” No big deal as long as she never has to leave her apartment.

Herman, the home-schooled time traveller, knows his grandfather is dead before he enters their apartment. Petunia Delilah, in the throes of labour, can’t reach her midwife. Jimenez, the custodian, crosses the wrong wires and sets the elevator on fire.

And then there’s Faye and Katie and Danny.

Everything that a little goldfish named Ian needs to know about life—love, death, sorrow, elation, lust, fear, desire, and hope—can be found in the Seville on Roxy. Go ahead and take the plunge.

Bradley Somer’s short fiction has appeared in literary journals and anthologies. His first novel, Imperfections, won the 2013 CBC Bookie Award for debut author of the year. Fishbowl is his highly anticipated second novel.