My 16-year-old niece mentioned to me the other day that she is thinking about taking a summer job. She’s been offered a nanny position and is contemplating whether or not the long hours and lack of freedom will be worth the money. We discussed the pros and cons and when she mentioned that the job was only for three weeks, I gave her a bit of advice that I’ve taken to heart numerous times: you can do just about anything for a set amount of time.

I’m a person who likes to work towards an end. It’s how I function. As long as I know that there is a fixed time limit, I can work hard, make sacrifices and tough it out. Thinking back, I can probably credit this work ethic to all the years I spent in university.

I attended the same school for both my Bachelor’s and Master’s Degrees, a seven-year time period of my life. My university was structured in four quarters per year, with roughly 13 weeks per course. I was living on my own and I was working 30-plus hours a week in addition to attending my classes. The only thing that kept me from going stark-raving, bang-my-head-against-a-wall, bat crappolla crazy was the belief that I could do anything for 13 weeks.

Knowing that there was an end in sight got me through pregnancy, Teacher’s College and all those years I taught, wrote report cards and led parent-teacher conferences. I suspect that it will also get me through my daughter’s tween and teen years (here’s hoping). I guess it’s fairly natural for people to organize their lives into blocks of time, although most of us prefer months, years or decades instead of mere minutes like Max in Lisa Scottoline’s new thriller, Every Fifteen Minutes. 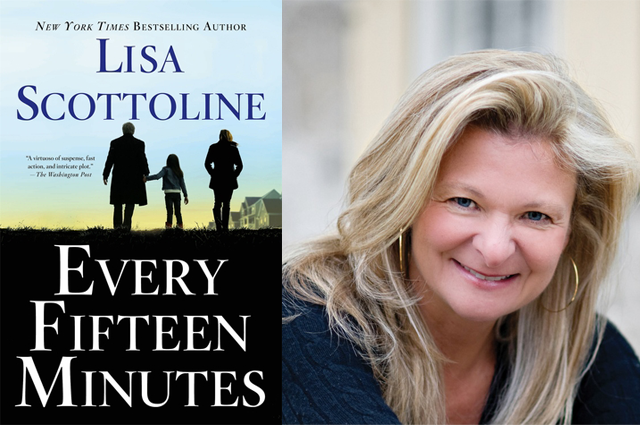 Max Jakubowski is a seventeen-year-old suffering from the ritualistic behaviours of Obsessive-Compulsive Disorder. His life is controlled by his overwhelming need to tap his head and recite the names of colours every fifteen minutes on the dot. He doesn’t know why he does it and he can’t stop.

Dr. Eric Parrish, the Chief of the Psychiatric Unit in an esteemed and renowned hospital, is convinced that he can help ease Max’s compulsions and anxiety.  But when Max confesses that he has had visions of hurting a local girl, Dr. Parrish must decide whether or not he is obligated to warn the girl’s family. He doesn’t believe that Max will act on his impulses and he doesn’t want to shatter the fragile rapport they’ve been building.

Dr. Parrish chooses to trust Max and when the girl is murdered, he is aptly horrified. Did he misjudge the depth of Max’s pathology? Had Max managed to disguise sociopathic tendencies? Is he losing his ability to recognize the severity of some mental illnesses?

The rumour of a presumed misdiagnosis spreads like rapid fire and Dr. Parrish’s reputation, and that of his hospital, are tarnished. He is prevented from visiting his patients, his ex-wife files for full custody of their daughter and his own anxiety rears its ugly head.

Dr. Parrish is convinced that his original diagnosis of Max is correct.  And if he is right, Max’s innocence can only mean one very frightening thing: someone has set out to ruin his career, and possibly, his life.