You are here: Home / Relationships / Dating / Could This Be The Dating Solution I’ve Been Waiting For?

This winter I decided I would commit to online dating. I wouldn’t do it half assed. I’d actually pay for a site. I’d actually message people and not wait for them to find me. I would go out on at least two dates with people, if they asked. I was confident. I know many people who have found the loves of their lives online.

Here I sit, a short four months into this project and I’m out. Four months. About 8 unsuccessful dates. Okay let’s call it 7.5. I met a great man in the early goings but our interest levels weren’t high enough to beat the challenges of timing (actors and single mothers aren’t an ideal combo). A few weeks later, I tried again. Sweet guy. I wasn’t feeling it though, but true to my promise, I went out for a second date. I’ve now decided to trust my instincts.

A few weeks ago, I went out with a lawyer, who I guess was bored of asking questions all day at work because he couldn’t ask any and he chose not to cross-examine me. That night, I got home, ate a giant burrito and almost gave up. Then a very interesting guy caught my eye, so I messaged him. He wrote right back. He was witty and sweet. Hmm. Okay. More like it. We messaged a few times while I was away on vacation and planned to go out this week.

When I emailed to firm up plans, I got completely brushed off. For once, I thought ‘screw it’. So I asked how he went from ‘can’t wait to meet you’ to ‘don’t think we’re meant to meet’. His response was, ‘these things have a shelf life.’ A SHELF LIFE? Isn’t that like a seven-year itch? Not a seven message exchange?

So you know what? Adios online dating. I’m so tired of being contacted by 5″5, 65 year-old Harley drivers, whom I’m sure are quite lovely but don’t quite fit my search parameters.

So if not online, then what? I thought of handing out flyers to all my friends in the hood to see if they had anyone to set me up with. Then I saw this story…. 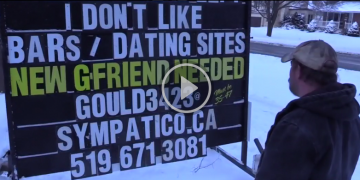 I love this guy! A sign? He cooks? His cleans his house that he owns? I’m too old for him and I don’t like the Leafs but I love his idea. (see the full video here from CTV London).

So maybe next month, instead of spending a couple hundred bucks on babysitting, I’ll invest in a sign.

How about this? Think it’ll do the trick? 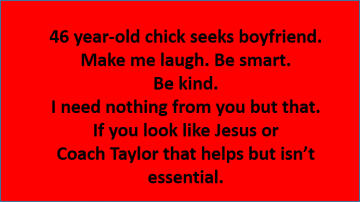