The other day I was driving to work and thinking about these 13 years and everything that has happened to me without her. I came up with quite a list.

I climbed a mountain.

I did a triathalon.

I buried my grandmother.

I had a couple of dramatic love affairs.

I moved on from some friendships and made life lasting ones.

I made a turkey dinner!

I became a writer.

When I read this list, I’m hit with two thoughts. First, I’m deeply happy with my life. Secondly? Every single one of these ‘events’ would have been sweeter; easier or more amazing if she had been here to share them.  She’s with me while I’m doing them and I still live with trying to make her proud in the back of my head. But goddamn it, I’m still so pissed off that she’s not here. So pissed off. 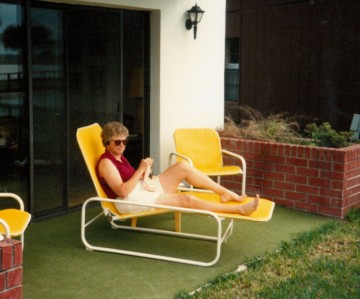 But I’m so thankful to have had a mom whose loss I still feel everyday.  So incredibly thankful. Sigh.

*I just found this picture of my mom last night – and it now ranks among my faves. If I could photoshop in a lukewarm cup of coffee; my nephew Sam and a tv with golf on it…it would be perfect. She’s in Florida, knitting and probably listening to Zamfir, master of the pan flute on those headphones. But the reason I love it so much is the look on her face – part I love you and part I will kill you for taking my picture. And her toes. Always curled up. Perfection.