[adinserter block="1"]
You are here: Home / Parenting / You’re Not Gonna Hear Me Roar!
Share this...

It’s been about a week. A little over a week. Yup, I’d say that’s right. I had an Oprah AHA moment.

Over the last few weeks, Will has had some sporadic tantrums. Tantrum almost can’t capture what it is that he’s doing. His teacher thought that he was going to go into convulsions. His little head looks like it’s going to explode. He screeches in a way that is not of this world. It’s really awful. Seriously.

And then, he just stops. At school, he had thrown off his socks and one ended in the garbage. At the end of his episode, he stopped, said, ‘I better get my socks,’ and went about his day.

I had a talk with his teacher and we just couldn’t figure out where it was coming from. I went home that night and thought. And I thought. And really when there is only one parent, it didn’t take long to figure it out.  Yeah. that’s me. Right here.

It was magnified for me that Friday night when, after I said goodnight to Will he said, ‘night mom and I’m really sorry for being such a bad kid.’ I ran back to him and smothered him with his kisses and explained that even when I yell, I never EVER think he’s a bad kid. 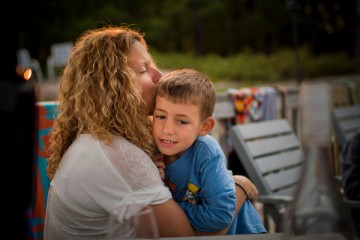 There’s always tons of this…now we just need less of the rest!

I’ve written before about my propensity to yell. I’m a yeller. But this time, after I stopped crying, I thought about what it is that I’m yelling about. And I saw a pattern. Stupid things when I’m tired. THAT’S what I yell about. And like Will, I can go from the happiest person in the world to a raging lunatic for two minutes and then back to regular old me. It’s not acceptable.

So for the last ten days, I’ve been making a huge conscious effort. I really have. I’m taking deeper breaths and I’ve not become Mother Theresa, it’s just that I’m saving the raised voice for when it’s needed. When I’m about to freak out, I take a second and think about why. It’s really helping me to keep my cool. And in turn? We’ve been tantrum free for a week.

All I can do is try, right?

“Stop making that noise, it makes me want to throw squirrels.” The sound of crackling plastic was driving my husband to the point of rodent … END_OF_DOCUMENT_TOKEN_TO_BE_REPLACED

Summer used to be magical. The hot weather, the outdoor adventures, the complete and total lack of responsibility. School was over for the year and … END_OF_DOCUMENT_TOKEN_TO_BE_REPLACED