You are here: Home / Parenting / Haters Back Off: Instagram ‘Beauty Queen’ Essena O’Neill Is Trying To Live Her Life

Chances are if you have an active social-media account, you will probably spend a significant amount of time trying to increase your followers. Perhaps you incorporate trending hashtags into witty, topical tweets. Most likely you will follow people who follow you, in the you-scratch-my-back-I’ll-scratch-yours fashion that surrounds Twitter and Instagram.

So if we ever reach the lofty heights of half a million followers on Instagram, 200,000 on Tumblr and YouTube and 60,000 on Snapchat, there’s no way we’d pack it all in and swear it off forever, is there?

Well, that’s exactly what one social media maven has done. For those of you who are not familiar with Essena O’Neill, here’s the skinny. The 18-year-old Australian, who attracted a huge number of followers on Instagram for posting beautiful selfies, decided after building up her online presence, that she is done with social media, deeming it “not real life”. 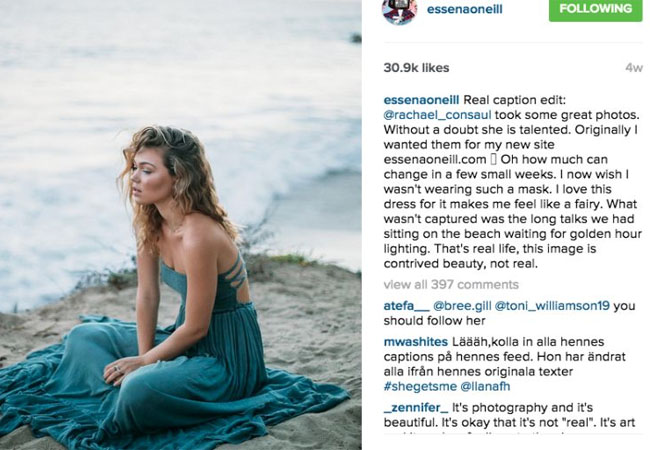 O’Neill deleted over 2000 pictures, editing her accounts and re-captioning numerous posts to uncover the evils that lie beneath seemingly innocent, smiling pictures of herself. Despite putting that superficial world behind her (and not to mention quite possibly burning numerous sponsored bridges in the process), many have branded her actions as publicity seeking and as a form of attention seeking.

It’s inconceivable that the 18-year-old ‘beauty queen’ of Instagram was going to slip away quietly, log out of her account and switch off her computer in virtual silence. And if she felt that she had something to say that was of value to other teens, taking hundreds of photos of themselves and checking their phones multiple times throughout the night, then why shouldn’t she? 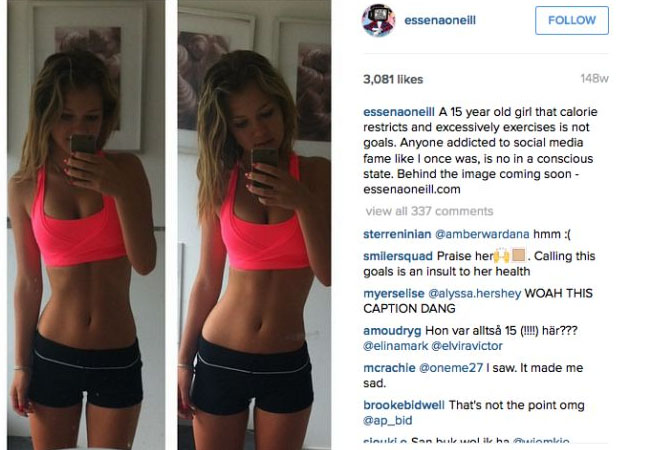 If teens can see that her life isn’t perfect, and that being thin and finding the best filter for your bikini pictures isn’t everything, then it may give them a bit of much needed perspective. I say, good for her.

When I was at school, cell phones were just becoming popular, and before that my sister had used a pager. Even if my parents had put up resistance, we would have worn them down eventually with endless cries of “you’re ruining my life” and “everybody else has one, so WHY cant I?” and general teenage tantrum behaviour.

In other words, it doesn’t matter what we tell our teenage children, because we are ALWAYS going to come off as an out-of-touch old grump. Appealing to them to stop taking pictures and to take a leave of absence from social media will inevitably be greeted with much groaning and eye rolling.

Because let’s face it, that’s like telling Elvis Presley that his pelvis shaking is vulgar. And who wants to be that guy?

So surely a peer is far better placed to warn teenagers of the perils of being selfie-obsessed and social media driven, and to champion pursuing things that have integrity and value beyond the superficial.

Does it concern me that my 11-year-old nephew has zero attention span and rarely finishes a story without being distracted by the bleeping of a social media notification on his cell phone? Sure.

But am I going to be the old fogey who tells him that “back when I was a kid” that wasn’t how we rolled? Heck, no!

Because they are the same traits that have always belonged to teenagers—feelings of insecurity, low self esteem, identity crises—it’s just that now they are magnified under the microscope that is Twitter, Facebook and the like.

And while, I’m glad I didn’t have an Instagram account when I was a teen (the once-yearly school photos were more than enough, thank you very much) I’m not going to judge those who do. Because in 2035 my nephew and his friends will be saying: “Back in my day we didn’t even have space ships….”