You are here: Home / Parenting / Education / What happened to all those pennies?

The pennies are gone. Other than the handful you may still have wedged in between the couch cushions or lost in the abyss (aka the purse) somewhere, they are no longer wanted…although students from across Canada would tell you they are still needed. In fact, more than 3000 schools and thousands of kids across Canada participated in the biggest penny drive EVER!

I’m sure some of your kids even contributed to the collection created by Free The Children and coined the  “We Create Change” initiative. The idea was simple, collect all those unwanted pennies in the year-long Water Initiative to provide 100,000 people with clean water for life.

So, you may be wondering what happened to all those pennies? 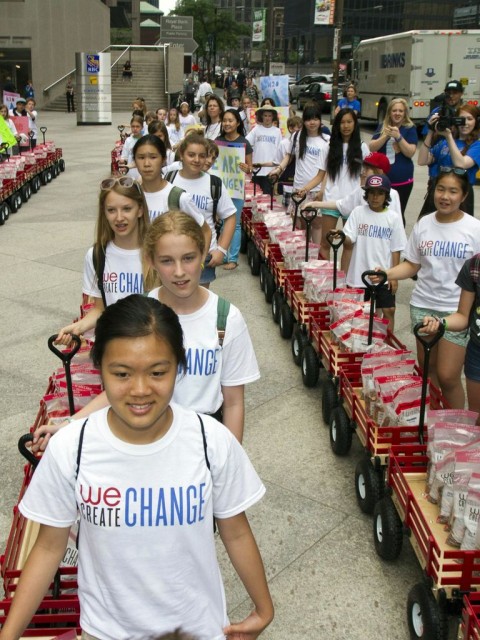 To mark the end of the school year, Free The Children and RBC celebrated with very proud students in the Financial District to announce that the nation-wide penny drive had raised 140 million pennies ($1.4 million)! That translates to providing 56,000 people in developing countries with a permanent sources of clean water for life!

“We are so incredibly humbled by the amount of change Canada’s youth were able to achieve this year, and we can’t thank RBC enough for opening up their branches to accept the more than 56,000 penny bags that were dropped off throughout the year,” said Marc Kielburger, co-founder of Free The Children.” On average, 80 percent of illnesses in the developing world can be linked to poor water and sanitation. Thanks to the incredible efforts of youth across Canada, the “We Create Change” penny drive will provide 56,000 people in our developing countries, clean water for life.”

Next year’s We Create Change campaign will focus on a new coin drive to support education in Free The Children‘s developing communities overseas. The campaign will also include tools and resources focused on financial literacy for teachers here in Canada to use and educate the students right in the classroom.