As a single mother of a boy, I’ve mentioned before that I had a few “guy” things that I was worried about when it comes to raising him.

#1 on the list: who was going to teach him how to pee standing up? I can’t even pee and crouch for godsakes. Yup. That was me on an Outward Bound mountain climbing trip looking for strategically felled trees to make makeshift toilets out of. So really, I just sort of crossed my fingers that peeing standing up would come as naturally to Will as dinosaurs, trucks and sadly, guns.

Well, I needn’t have worried! It came slowly but the boy stands all the time now. And he’s learned the “keep the pants almost up” trick, too. Three cheers for Will.

Until last week, when he called me into the bathroom because he had peed all over it. It being the wall… the toilet… the floor. So I asked how that happens. He said it was just a huge pee.

When I started to think about it, I recognized that Will has two ways of peeing standing up — I call them the Christ The Redeemer or the Queen’s Guard.  See what I mean? Hands at the side or hands up to the gods. 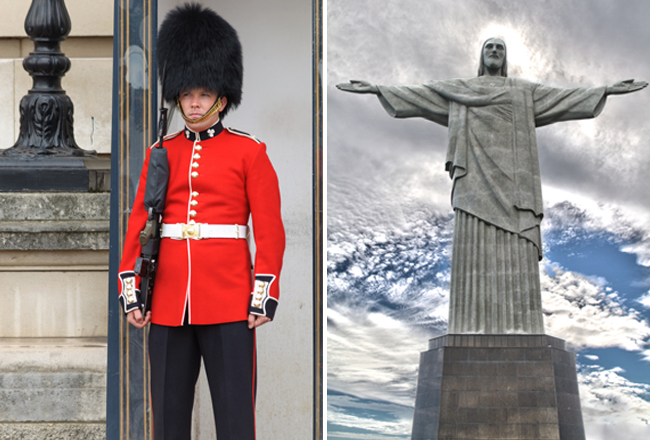 Then it hit me what was going on here.

So I started to poll the masses.  I asked the guys at work. I asked my friend’s husbands. And the results were 100%. There should be holding!

The kid hadn’t learned this. So I broached it with him. “Hey dude. Wouldn’t it make sense if you held your penis while you were peeing? You know, like aiming?”

He looked at me and shrugged and said, “I guess.” The miraculous thing here was that he didn’t question my suggestion!  And he’s all over it. He proudly told me that it works really well! Maybe Mom does know best? Even on boy matters!

Now if I can get him to put the seat down and flush, my washroom work is done!