You are here: Home / Parenting / Tweens & Teens / The Politics Of Prom (And What On Earth Is A Promposal?)

Most teens think it will be the Best Night Of Their Lives because they are still too young to realize that there will be many, many, more Best Nights of Their Lives and that Prom probably won’t make the top five by the time they’re in their mid-twenties. Nevertheless, The ‘Politics of Prom’ has reached a whole new level, thanks in part to technology, and also an entirely new set of unwritten Prom rules.

Last week, I spent an hour with my partner’s daughter, as she scrolled down her Instagram feed, showing me photo after photo (after photo) of the girls in her grade in the dresses they’re wearing to prom (which I should mention, is still two months away).

All the photos featured only the dress, with the dress wearer’s head cut out of the photo.

Yes, for almost an hour, I felt like an entertainment show host on the red carpet at the Oscars, judging these faceless photos of teens in their prom dresses. As she scrolled down, we judged: ‘Gorgeous,’ ‘Love that dress!,’ ‘Um, no! Just no!,’ ‘Like the colour, hate the style.’ (I will admit the experience made me feel a tad like a bitchy teenager).

By posting these faceless photos on Instagram, everyone can see what other girls are planning to wear to prom. Because if you DARE even try on the same dress as someone else at your school, it’s, like, the WORST thing you could do to a classmate and they will probably never forgive you, for the rest of your life. That’s how serious these girls are about taking dibs on dresses.

I remember the days of buying a prom dress with my mom and then calling my friends to describe it…and that’s it (oh, how I’m aging myself!) Nowadays, thanks to having cell phones, teens usually shop with friends and then send photos or FaceTime their mothers for approval of their gowns.

“The whole prom-dress-Instagram is in place so that everyone can post their dress to avoid people getting the same one. Meanwhile, you see five Royal blue dresses even though people have posted what they want to wear this year,” explains my partner’s daughter. “One girl posted her dress and another girl went and bought the same dress anyway so that was a lot of drama. Nobody wants to wear the same dress as someone else because I guess it’s like your special night and you want to rock your dress and not show up with someone wearing the same dress as you. It’s like in the magazines, ‘Who Wore It Best?’ but on your prom night you don’t want the other person to look better,” she laughs. But she’s completely fucking serious. If you buy the same dress, you’re pretty much scorned.

These girls had such stunning gowns (yes, floor-length gowns!) that many of them actually could have been featured in US Weekly under ‘Best Dressed At The Oscars,’ they were so incredibly gorgeous.

I think my prom dress cost $100, if not less. Girls today are spending upwards of $500 on a gown for their proms. Again, aging myself, no one knew what I was planning to wear until they saw it. No one actually saw my prom dress until prom night.

Since these girls live in the age of selfies, they must get their makeup and hair done, because they know that photos will be taken all night long. When I went to prom, gazillion years ago, there were just a couple of photos taken by parents at the start of the night. I didn’t have to worry about looking like a hot mess dancing and a photo being posted somewhere on social media (which is probably why I didn’t get makeup done).

And there are even more Prom Politics. Back when I was a teen, I also went on a date to prom with a boyfriend who was a year older than me and attended a different school. He was graduating that year. I was not. I wore the same prom dress I wore to my own prom. But these days, The Politics of Prom dictates that if you are in Grade 11, and are invited to prom by someone who is graduating Grade 12, you must wear a short dress, unlike graduating girls, who are wearing gowns. Why?

“Short dresses to prom for those in Grade 11, because I guess they seem less fancy and it’s not their special night. So, Grade 12s want them to wear shorter dresses,” my partner’s daughter explained. (I can’t wait to hear the drama when and if a Grade 11 shows up in a gown! Teen drama is just so fascinating!)

And then there are ‘Promposals,’ which is a unique way of asking someone to prom. This is nothing new from recent years, except the expectations seem to get higher and higher and more unique. (Even my partner’s daughter, who has had a boyfriend for more than a year is waiting, waiting, waiting for her dude to ask her to her Prom, even though, obviously, they are going to go together). 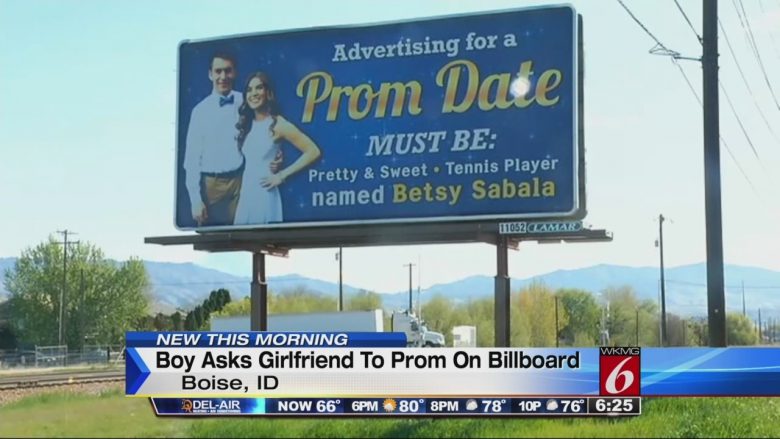 “It’s just a fun way to ask someone to prom. Lots of people think it’s overrated but I think it’s cute,” says my partner’s daughter. She also adds that the promposal “usually has to go with a funny pun and then the big question: will you go to prom?”

I’m really glad that promposals weren’t around when I went to Prom. I think my boyfriend just… asked me? Which seems totally lame by today’s standards.

As my partner’s daughter says, “Not going to lie. If someone promposes to you (yes, that’s a verb), it’s close to impossible to say, ‘No,’ because they put so much thought into it and you don’t really want to leave anyone without a date.”

Someone in her grade sat in a wheelchair and said, ‘I’d break a leg to go to prom with you.’ Another gave a girl a box of pizza and on the inside of the box wrote, ‘I know this is this is cheesy but will you go to prom with me?’

So far, they are the only two ‘Promposals’ at her school, but she adds, “They are all gonna come soon!”

Welcome to the wonderful world of The Politics of Prom in the year 2017—which seem almost as insane as a certain President’s politics. But, as the kids say, ‘Whatever!’