You are here: Home / Parenting / Tweens & Teens / If My Daughter’s Bra Strap Is Distracting You, It’s Your Problem

As the start of the school year quickly approaches, so will the ongoing debate about ‘dress codes.’ Sometimes I feel like the only mother of a teenage daughter who doesn’t give a sh*t about what my daughter wears to school or, for that matter, when she’s not in school.

In fact, sometimes I even find myself encouraging my daughter to shorten her skirt and show off her fabulous figure.

Yes, my 13-year-old daughter goes to a private school where she is required to wear a uniform. And, yes, just like public schools, there are dress code rules. Her skirt can’t be more than two inches above her knees, for example. Bra straps can’t show.

While uniform shopping last year, my daughter insisted she would only wear a baggy uniform shirt and that her skirt length should be way below her knees, practically down to the middle of her calves (which saved me a few dollars in alterations, on the plus side.)

Unlike almost every other girl at her school, she refused to have her skirt shortened and refused to roll up the waist band to make her skirt look shorter, as almost all the girls do at her 1000-student private school. In her very conservative school uniform, my daughter looked like a pioneer who should be churning butter and making a quilt—that’s how adverse she was to showing any skin.

But then a funny thing happened. The other week, she came down to breakfast dressed in, what I thought, was an adorable outfit. Was she wearing a push-up bra? Yup! Could you see a bit of her cleavage? Yup! The shorts she was wearing that day would have fit a five-year-old. And, yes, her bra straps were not only showing but so were the sides of her bra, courtesy of the very low-riding tank top she had put on.

I’ll admit, my first thought was, ‘Should I let her leave the house like that?’ I knew at that point, I had turned into my mother. I didn’t say a word though because I liked what she was wearing. Besides, parents need to pick their battles and this didn’t seem worthy of one.

I looked at my daughter, now so super-confident with her body, with pride. This year, she’s asked that her school skirts be short. I’m not kidding when I say that many of the girls in her school need (and are required) to wear boy short underwear because their skirts are the size of napkins. 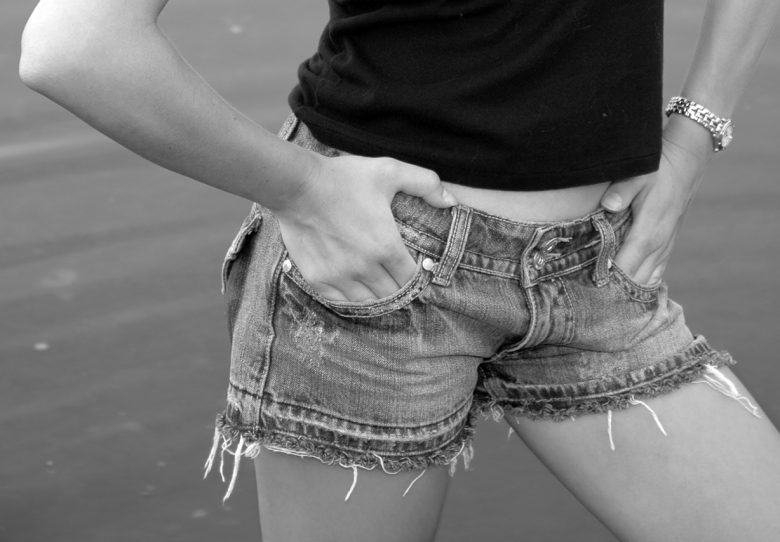 The dress code debate always seems to come down to how male students get ‘distracted’ because of all this female skin that is showing. F*ck that! I so strongly disagree with telling people, especially women and girls, what to wear. My friends, who have children who go to public schools, tell me about their dress code woes. Their daughters have been told that they can’t even wear spaghetti-strap tank tops because their bras show. They can’t wear shirts that show their belly buttons. Cleavages must be covered.

I literally cringed when I read this story about dress codes in a small town school in Alberta. The article tells the story of how a note was posted in the hallways ‘telling girls to dress conservatively to avoid distracting boys at school.’ WTF?

I’m only beginning. The note read, word for word, ‘When you wear little to no clothing and dress provocatively because it’s “too hot out” or because you think it’s “attractive,” you are putting boys at risk of having a distracting working environment and saying, “your clothing is more important than their education.” Instead of dressing like a THOT, value the male education and dress conservatively.’

There is so much wrong with this, I don’t even know where to begin. Firstly, a ‘THOT’ is teenage slang for ‘That Whore Over There.’ Are you telling me that because a girl shows a bra strap she’s a whore? Are you telling me that your son, because a girl may be wearing short-shorts, can’t possibly get good grades? Pur-lease! Yeah, let’s just blame ‘skin’ for your failing grades. Why don’t you value the confidence of girls—who dress, I think, more for other girls than for the guys—as much as you value male education.

Apparently, the note was written by two boys in response to another note posted in one of the school’s washrooms that read, ‘When you interrupt a girl’s school day to force her to change her clothes or send her home because her shorts are too short or her bra straps are too visible, you are telling her that making sure boys have a “distraction free” environment is more important than her education. Instead of shaming girls for their bodies teach boys that girls are not sexual objects.’ Amen. And, seriously, it’s 2017.

It’s not that I’m proud of my daughter for following fashion trends like all her friends (yes, showing lacy bra straps and short-shorts are in fashion). But I was proud of her for having such confidence in what she chose to wear. She wasn’t dressing for any boys. She was dressing for herself.

When I was her age, there was no way I would be able to come downstairs wearing what my daughter was wearing going off to public school. I would be mortified for my parents to see what I actually wore in school. Like many of my friends, back in high school, we left the house in one outfit and quickly changed into another less conservative outfit in the school’s washroom, or at a friend’s house, whose parents either weren’t home or didn’t care what us gals wore. And, yes, that still happens today. I remember, in the early days of my relationship, being in the car while my partner’s daughter changed because her mother would never let her leave the house ‘like that.’

So I know many mothers must have opinions on what their kid wears to school.

There are two points I’m trying to get at. The first is, why don’t we teach our boys that no matter what a girl wears, or doesn’t wear, is none of their busines—and if they find seeing another girl’s shoulders distracting, they should redirect their eyes to the f*cking chalkboard, textbook, and teachers.

Secondly, we need to teach both boys and girls that just because a gal may show off her belly button or—OMG—a bra strap, that doesn’t mean she’s a whore. I got straight A’s in high school and, yes, I bared my belly. I’m not suggesting we send our kids to school like a Kardashian at a fashion show, but I am suggesting we let them dabble in fashion, wear clothes they feel comfortable in, and embrace their bodies with confidence. I will not let my daughter be blamed for someone else being distracted. Get them a fidget spinner.

I look back at photos of me when I was 16 years old in a bikini. I look very uncomfortable, covering my stomach, which, mind you, was as flat as Edmonton back them. Looking back, I wish I had the confidence that my 13-year-old does in the outfits she’s now picking out herself, be it shorter skirts at school, or wearing short-shorts.

Finally, why, in this day and age, would anyone consider a girl a whore or slut for wearing whatever she wants? In fact, the word whore and slut should be banned, in school and in life.

I am also the mother of a son, who has three sisters. He is being raised to be kind-hearted, friendly and happy. If he ever says to me that a girl distracted him at school with her outfit and that’s why he’s getting crap grades, guess what? I’m going to tell him one thing: study harder, dude! Because it’s not a girl’s bra strap or belly button, that’s the problem.