You are here: Home / Parenting / So, You’re Going To Have The Crazy Kid In Kindergarten This Year

And you are dreading it.

Because you know your kid is going to be that crazy kid in kindergarten. And everyone is going to judge you, and you’re going to dread any phone call, personal interaction, or email from your kid’s teacher. You already know that fall conferences are going to result in epic bouts of vomiting and diarrhea.

It isn’t that your kid is bad exactly, it’s that they make so many bad choices on the daily, and nothing you have ever tried has had lasting results. You wish you could follow your child around for a few weeks and explain away their behaviour. You try to talk with your spawn in the weeks leading up to the first day of school. You explain appropriate behavior, and what is inappropriate. You quiz them on what to do when encountering certain situations (having to poop(!), bullies, a classmate putting their hands on them, being angry, not getting the toy they want at recess, etc.,) and you try to dot every ‘i’ and cross every ‘t’.

I’m here to tell you, it probably won’t work. You’re very likely wasting your energy. No matter how much prep you give them, how many years they have in preschool, you know in your heart of hearts that shit is about to get real.

Take a few deep breaths, grab something strong to drink, and be calm. I’m here to help. I was in your shoes last year. It’s going to be ok. You’re going to get through this.

1) Give in to the inevitable
That phone call or email from your kid’s teacher is going to happen. Just assume that is it coming so that the shock will be easier to absorb.

2) Know your kid
I tried to warn Jack’s teacher ahead of time last year, but I didn’t get the feeling she was receptive to the information. I emailed and told her face to face multiple times that I knew he wasn’t feeling challenged, and that he was more likely to get in trouble during reading and math time. He had already done the kindergarten curriculum during his Montessori preschool, and was done with the work in minutes and had nothing but free time to be a royal shit.

I shouldn’t have been surprised at the fall conferences when I was told he was super disruptive during class, especially at math and reading time.

In hindsight, I wish I had been more forceful with his teacher in the beginning. Politely forceful. I wish I had asked for resources or help earlier. I wish I had asked for help outside of his classroom. I finally ended up going to Goodwill and getting a ton of books that were on educational topics like volcanoes, dinosaurs, anatomy, and space. He was given permission to read those during reading time instead of the kindergarten books, and his behavior improved dramatically.

In the beginning, I felt like “that” parent who kept trying to convince others that her child was special. I was made to feel like a stage mom for trying to make sure Jack was challenged at the appropriate level.

I will say somewhat gleefully that during our spring conference, we were told Jack was one of 20 kindergartners in the whole district to test into the gifted program.

My external response: “That’s great, I know he will enjoy it”. 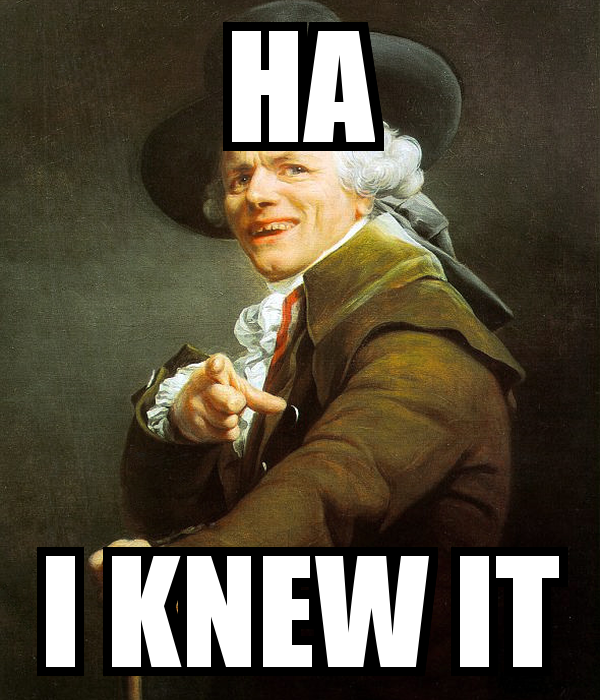 3) Learn about educational fidgets
Jack is a wiggling boy. Most boys are pretty wiggly, but he tends to be on the “wiggly” side of wiggly.

And it was causing problems for him, his teacher, and his classmates. He’s quite handsy and loves giving hugs and high-fives (which were not allowed in his classroom…I’m not sure I agree with that, but those were the rules), and didn’t understand it wasn’t ok.

We finally came up with a sign for his desk that we laminated and his teacher taped to it. He would tell me “I was going to be naughty, but then I read my sign”. It didn’t always work, but when it did, it really did.  The sign looked like this (but was really colorful):

And he could read every word of that without help in October. Hence my insistence that he be allowed to read above the kinder level.

We also put a bungee cord around his chair legs for him to kick when he felt the need to be a wiggle monster. I described it as he was being a duck – all busy legs paddling under the water, but above the surface he was calm.  Well, calmish. Calmer…?

There are other fidgets out there that are geared towards kids with different needs. Tactile kid?  Try velcro under their desk. Can’t keep their hands to themselves? A little ball of silly putty on the desk can keep them occupied. Feel the need to tap? Get pencil toppers that are silent (they seriously make them!) so that the kid can get the wiggles out and not disrupt others.

4) Acknowledge that you’re human
The turning point for us was after Jack’s fall conference. I had a nervous crazy breakdown. Like ugly crying, screaming, and just going nuts.

All in front of Jack.

Was it perfect? No. Did it show Jack how broken and normal I was? Yes.

After that moment, I resolved to try to focus on all the good he was doing.

5) Acknowledge that the teacher is human
I will say that the idea of teaching kids at any age makes my whole body itch, but God bless you, teachers, you get up every day and do it! And given my experience being surrounded by teachers for most of my life (my mom taught k-2), I’ll say that about 95% of them do it because they LOVE the work. They love the kids, and they love impacting lives. And they work super hard and have to deal with crazy ass parents (cough, cough) every day.

I know Jack was one of 23 kids in the class. I know he needs a lot of attention and that is hard, if not impossible to do with a whole class full of ankle biters. My mother-in-law (former elementary teacher) volunteered in his classroom and said his teacher was good with the kids. She said they were doing stuff in that classroom that she couldn’t have done with her fifth graders years ago. She also said that (at least while she was there), Jack had really wonderful moments and was super engaged and a leader in the class.

My biggest wish was that the awesome cool things they were doing in the classroom and all the great moments were also reported to us. We felt we were only contacted if something had gone wrong, but an occasional “you know, Jack had a great day today and is making some real improvement” could have backed me off of the ledge a few times.

6) Focus on the good
It’s easy to get bogged down with all the times your kid is getting in trouble. I certainly did. I put so much pressure on Jack and focused on every single negative thing he was doing at school. It overshadowed the positive experiences he was also having, and the inroads he was making on his behavior. And my intense focus on the bad was stressing him out and was exacerbating everything.

7) Reward
I felt like I was bribing Jack for good behavior, but someone pointed out to me that I don’t go to work and not expect a paycheck. So, we came up with a system that rewarded the good behavior, discouraged the bad, and let him work towards goals. His classroom had a color chart system. Pink and purple were the top. Green was “good”, yellow was “warning” and red was “stop”.

His first goal was to stay off of red for a month. He got to choose his reward (a juice box in his lunch every day for a month), and we made charts and signs and everything to remind him about it. We told his teacher about it so she could also remind him if necessary. 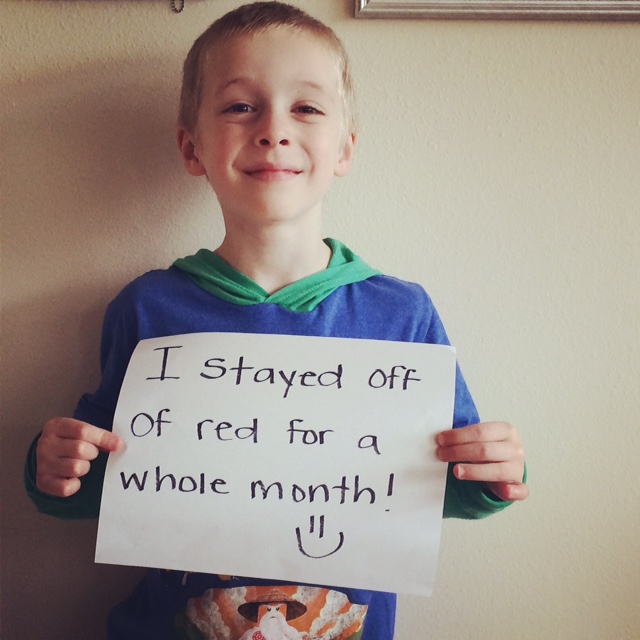 And he was so proud!

We moved on to something more “cash-based” after that. A day ending on green netted him a dime. Pink or purple was worth a quarter. Yellow meant nothing, and red meant he paid us $1.00.  Homeboy is financially motivated, and because there were tiers of behavior instead of “you get on yellow and no TV for the night”, he knew there was wiggle room (ha ha) to be human and make mistakes.

8) Have your kids back
This is something I wish I had done earlier. Troy and I are both the spawn of public school teachers, so we know the incredible amount of work they do, for very little pay. We know all about getting to school hours before the day starts, and not leaving until 5:30 or 6 pm at night. And because I know so much about the amazing work that educators do, I was loathed to ever consider Jack’s side of things in discussions with his teacher. I always took her word for gold, punished him for his transgressions and prayed it wouldn’t happen again.

This goes back to point two (know your kid) because I should have had Jack’s back more often in those discussions. I should have pushed harder for the resources I knew he needed to be more successful.  Instead, I just accepted fact for fact and took it out on him.

I remember going into his classroom before school one day to drop off a new load of books for him to read during class time. His teacher was in the room and started off the conversation with the negative.  “Jack did this yesterday, Jack needs to work on this”, etc. I finally just stopped her, said “I know he isn’t perfect, but he is working so hard at making better choices.  He’s come a very long way from the start of school and we’ve found that he responds better to positive feedback than only hearing the negative”. She then agreed he had made leaps and bounds in his behavior, but still (insert negative stuff I tuned out). I said, “I’m glad he is improving and we’ll keep working with him, but at this point I just want him to get through Kindergarten without his soul being crushed from only getting negative feedback”. And then I walked out of the room.

It was my total dropping the mic and walking off the stage moment as a parent.

So, we keep working with the boy, and some times things don’t go well and we have days where I think we’ll be stuck in this rut forever. And then we have days where he spends so much time helping his grandparents, being gentle with animals and babies, and sitting for an hour in his room reading on his own accord, and I think “ah ha, we’re making progress”.

My sister took him to her friend’s house one day, where he played with my nephew and her friend’s daughter (both younger). She texted me that night saying how patient he had been with his cousin and the little girl. I remarked something like “oh he must have had a good day” or something dumb like that, and she said “no, I’m serious. He was amazing. Such a great kid”.

And I sat on the floor and I wept happy tears.

The next nine to ten months are going to be challenging, I won’t lie to you. However, this is a really small amount of time in your child’s educational journey. I urge you to learn from my mistakes and make your kiddo’s first year in school as positive as possible.

This post originally appeared on Frugal By Choice and was republished here with the permission of the author.