You are here: Home / Entertainment / Pick That Up 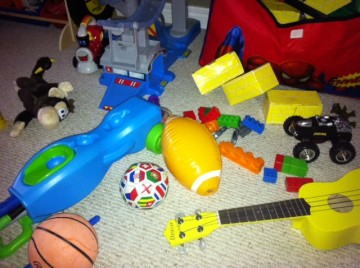 Have you ever thought about how much stuff you pick up in the course of a day? I never thought much about it; it’s just something you do day in and day out. I guess cleaning up after your kids should come as no surprise. You don’t hear too many kids suggesting they put away their dinner plate before they head to the park with the neighbourhood kids. (Though it would be a dream if they did.)

With the amount of bending over and picking up I do in the course of the day, I’m surprised I’m not as buff as the late great Jack LaLanne. Although that should come as no surprise either, he did drink carrot juice and tow boats with his mouth. I, on the other hand, pick up toys and put chicken wings in my mouth.

It doesn’t matter what it is, if a kid gets their hands on it, you can guarantee it will be left on the ground at some point. In fact, my kids leave a trail of stuff wherever they go. They’re similar to Hansel and Gretel, except their names are Travis and Rory. If they don’t leave their socks in front of their bedroom door, they’ll never know which room is theirs.

Truth is, I don’t really mind it that much. I did the same thing at their age and now as a (somewhat) mature adult, I’m a bit of a neat freak. I started thinking about the amount of time I spend picking up after them. I realize I’m providing a service so it would be interesting to delve into some math. If you don’t mind I punched some numbers to try and calculate how much of our time is dedicated to picking up after our kids.

I had to ball park this but here we go…I figure we spend approximately 12 minutes a day picking up after kids. I mean literally bending over, picking up and putting away. I also added an extra 3 minutes for the weekend because things tend to get a little crazier.

This means in the course of a year, you spend approximately 10.5 days a year picking up after your kids. Now, keep in mind, I excel at picking up toys but wasn’t so good at picking up math credits in high school so I may be completely wrong, but either way you spend a lot of time picking stuff up.

When it comes to leaving things on the ground kids don’t discriminate either. You name it and it’s scattered all over our house – pajamas, socks, diapers, squirt guns, plates, sippy cups, flip-flops, ukuleles, knapsacks, cereal…oh my the cereal. How come when Cheerios find their way from the bowl to the floor they stick like crazy glue? I swear I broke a toe trying to kick a dried up Cheerio once. I naively thought the same force that could kick a soccer ball 50 yards would be able to kick lose a circular piece of oat from a cold beige tile. Boy, was I wrong. I also didn’t realize how many dropped items would be lost for months/years at a time. Ever find a cheese string in the crevice of a car seat? Or how about soother in a winter boot? Speaking of winter, we once found the kids mini-drum set in the backyard after the snow melted. Oh well, it keeps you on your toes, even if they are broken from kicking dried up cereal on a cold beige tile.

Yep, the role of a parent is to love, care, educate and most often, pick up after their kids 10.5 days a year.