You are here: Home / Life / Finance / Paying The Piper: Kids And Allowance

In my last post, I described the three main schools of thought regarding kids and allowance and shared my own experience with each. I also promised to share my own brilliant plan for managing allowance in my family. Read on for details!

There are several schools of thought when it comes to kids and money, but before you can make the right decision about allowance for your own children, it’s important to ask yourself why give an allowance at all?

Ultimately, there are probably as many reasons to give children an allowance as there are parents, but here are a few of the main ones:

So when thinking about the best approach for me and my daughters, I sat down and thought carefully about why I would give my kids money, and also what I wanted them to learn about money.

If you expect me to give you extra money for something, I’d like you to earn it.

Once I had answers to those two questions, it was easy for me to settle on an allowance scheme for our family. It works like this:

So having worked out those three priorities, here’s what I did next:

First, I opened student bank accounts for both of my daughters that are linked directly to my bank account. This way, I can easily transfer their allowance to their accounts on a weekly basis. In today’s electronic economy, I am often without cash on hand, which makes it a bit more of a chore to pay allowance in cash.  Even if you are organized enough to have the correct cash every week on allowance day, I would argue that children need to learn how to handle money electronically. This may vary depending on the age of the child (little kids are very concrete thinkers so it’s better to pay them in a way they can really understand, i.e. cash), but by the time they’re teenagers, they should be learning how to use a debit card and how to monitor their account balance and transactions online through a banking website or mobile app.

Next, I settled on a fair weekly allowance. This was the hardest part. My oldest daughter is nearly fourteen. Her financial wants are on the scale of new Toms at $65 vs. nickel candies at the corner store for 65¢.

Little kids are concrete thinkers so it’s better to pay them in cash.

I considered $10 per week, but that isn’t even enough funds for a movie with friends, and it also means that saving for something bigger would take many months of zero spending. Since one of my goals is to give my kids the wherewithal to actually save for and make some of their own wishlist purchases (with the added benefit of freeing me from pestering), I realized that I would have to pay them enough to actually do this without sacrificing everything for months.  Some may disagree with me here, but I don’t think that giving up all fun for the sake of saving 100% of your income is a great choice. I wanted to give my kids enough money to be able to buy the occasional lipgloss or join their friends at Starbucks while still saving most of their money for that new iPhone.

Ultimately, I arbitrarily decided to pay them each their age in dollars each week. It’s just that little bit more than $10 (which didn’t seem quite enough) and it also solves two other problems: it increases with their age at a set rate and time, and it is scaled relative to their ages. While it’s not necessarily true that a thirteen-year-old will contribute proportionally more to the household chores than an eleven-year-old, teens are more independent and will therefore need more spending money.

Finally, I talked with my daughters and we created some ground rules for earning extra money (above and beyond their weekly allowance). Saving for a big ticket item like a new cell phone or a laptop can be daunting once you do the math, and I didn’t want my kids to be discouraged from setting lofty savings goals. We debated the merits of having a list of odd jobs with specific values (e.g. wash car: $5), but in the end we decided to go with a totally free-market economy. In other words, if you are really motivated to earn some extra cash, you will have to negotiate the terms on an ad-hoc basis. If your sister needs to get her room cleaned pronto, you might offer to help, for a fee. Or you might ask to borrow money in exchange for a month’s worth of dog walking on your sister’s day. In order to encourage them to be creative, I try to usually be amenable to their suggestions, although I do bargain a bit on the terms!

Saving for a big ticket item can be daunting.

For my part, the investment is $24 per week in allowances (plus a few dollars more on an ad-hoc basis if someone is extra-motivated to save) which is an amount that I feel comfortable committing. Each girl’s allowance is directly transferred from my account to hers on Friday. If I feel it necessary to withhold allowance, I can easily do so, and as the parent, I reserve that right. I have further promised them I will keep them fed, housed and supplied with clean undies, socks, toiletries and school supplies as long as they are dependent on me. In addition, I’ll buy them each some new clothes for back-to-school each fall, and they’re free to ask for clothes at birthdays and Christmas.

For my daughters’ parts, they can do whatever they like with their own money, be it buying the massive quantities of clothes and shoes they seem to need, saving for an iPhone 5, going out with friends or whatever. They are still required to keep up their share of the household duties, but that is understood to be just something we all do and is not a requirement for receiving allowance. 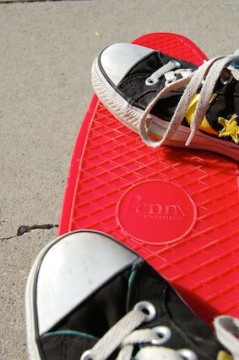 Saving for something special is rewarding in more than one way.

So far, this brilliant scheme has yielded excellent results. My teenager has begun to make smarter purchasing decisions, now that it’s her own money she must spend at the mall. Take her Penny board for exampe. She desperately wanted this very specific kind of (expensive) skateboard, and a knock-off just wouldn’t do. So, she shopped around for the right deal, calculated how long it would take to save for it, bargained here and there for some extra funds and met her goal. She was pretty proud when she bought that skateboard!

Even better: I recently heard her counsel her younger sister: “I know you’ve saved enough for that toy, but I think you’ll regret buying it because you’ll probably only play with it for a little while, and then you’ll have no money left for anything.”

How great is that?