When I was pregnant with my firstborn daughter, I was intensely interested in all things natural. I planned on a natural, drug-free childbirth. I planned to exclusively breastfeed my new baby. I planned to use cloth diapers. I planned to practice attachment parenting. I was terrified of vaccines.

I pride myself on my education and critical-thinking skills. I don’t take things for granted and I believe in making decisions based on facts, not emotions or trends or beliefs. I’m a strong supporter of science. And there are a lot of solid, fact-based, scientifically sound reasons for most of the choices I made when my first baby was born. Except for one.

When my daughter’s two-month immunizations were due, I found I just couldn’t bear to bring her in for the shot.

I vividly remember a visit in the fall of 2000 with a former housemate from university when I was around 36 weeks pregnant. She had gone on to become a doctor, and I decided to ask for her opinion on immunization. I had recently read a number of articles and blogs that suggested vaccines could be dangerous, they could cause severe adverse reactions, they contained mercury and they had even been linked to autism. It was scary stuff. So I put the question to her, “what do you think about immunization?”

Her answer (given as a friend, not a physician) was brutally honest: “in my opinion, people who don’t vaccinate their children are crazy.”

Despite her advice, when my daughter’s two-month immunizations were due, I found I just couldn’t bear to bring her in for the shot. Again at four months, I thought, “she’s just so small!” At six months, my girlfriend’s words were like a bell tolling in my conscience. I knew she was right. In my heart of hearts, I knew there was no “big pharma” conspiracy; that the risk of an adverse event was much smaller than the risk associated with contracting an infectious disease as a small baby; that I had been, as my friend called it, crazy not to vaccinate my baby. So, at her six month checkup, I began the process of getting her up-to-date. Later events confirmed to me the wisdom of my decision to ensure both my children’s (and my own) immunizations are up-to-date, including the seasonal influenza vaccines we lined up for three hours to get this fall! 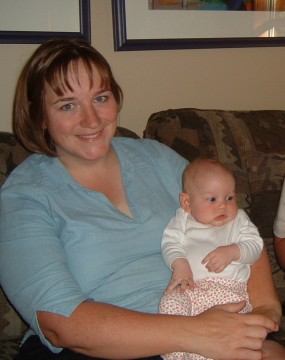 Not quite three years later, around the time my second daughter was getting her (on time) two-month immunizations, my cousin Madeleine was diagnosed with cervical cancer, caused by the Human Papillomavirus (HPV) which she contracted unknowingly from her partner in a monogamous relationship. Tragically, she died at 31, leaving behind two small children not much younger than my own. Every time I hear someone question the HPV vaccine (routinely offered to girls in grade five here in Alberta), I tell them about Madeleine. She was married to her high school sweetheart. He was her “one and only”. She was monogamous. She did all the right things. But he didn’t.

We may think that ten is too young to be immunized against a sexually-transmitted disease, but let’s be brutally honest here: not everyone makes good choices. And tragically, not every girl will be in control of the choices she makes about her own sexual activity.

Recently I received a letter from Alberta’s Chief Medical Officer of Health advising that susceptible individuals (including teachers, students and volunteers) may be excluded from school for 21 days if they cannot provide proof of immunization against measles, because recent outbreaks here in the province have affected at least three schools in our board. Alberta Health Services is offering special immunization clinics for school board employees who have not been vaccinated. Luckily, I know I received two measles vaccines as a child, which gives me lifelong protection. I am also considered immune by virtue of having been born in 1969 (those born prior to 1970 are considered immune because of the measles disease that was circulating widely at that time: age has some perks, I guess).

I can’t imagine having to miss three weeks of work because of a measles outbreak! And although most kids would love the opportunity to miss three weeks of school, a quarantine would impose a huge burden on the families involved. And a measles quarantine doesn’t just mean staying home from school – it means abstaining from all community activities. You can go to the movies, to the park, to the grocery store, or out for dinner at a restaurant.

And let’s remember that being quarantined is a trifle compared to many of the side-effects of contracting the measles.

According to the World Health Organization, “measles is a highly contagious, serious disease caused by a virus. In 1980, before widespread vaccination, measles caused an estimated 2.6 million deaths each year. It remains one of the leading causes of death among young children globally, despite the availability of a safe and effective vaccine. Measles is one of the most infectious diseases known to humankind and an important cause of death and disability among children worldwide.” This year’s measles outbreaks in five provinces across Canada are a sobering reminder that these infectious diseases are only awaiting the right opportunity to surge back into our lives.

April 24-30 is WHO World Immunization Week. Their slogan this year is know, check, protect. I encourage you to explore their website and consider the importance of immunization programs to both local and global health.

This post is not sponsored by any group or organization. All opinions are my own.