You are here: Home / Parenting / Education / Kids and Their Money!

Will got $105 for Christmas.  He got a $100 bill from his great-grandfather, which he saw before I could snag it away. He also got a $5 bill from my sister. He earned that one for putting on a Christmas ‘performance’. He charged her, ran up the stairs and put it in his piggy bank, all before we heard a note or saw a dance move! Smart kid. 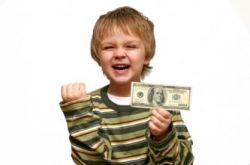 He’s become slightly obsessed with this $100 bill. He wanted to trade it with his buddy for two trash pack things. Yeah right. Then he wanted to give it to me for being so nice to take him to the library. Very sweet and I loved his thinking. He explained that he sees me giving our cleaning lady money for being nice and cleaning our house, so because I did something nice for him, he wanted to pay me.

I decided it was time for a bank account. Time to teach him about money.

He’s ridiculously excited about this ten minute appointment we have next week. I’m not sure he gets it, but he was pretty psyched when I said the  bank would pay him for letting them keep his money. (I didn’t tell him the measly amount…let the kid dream). First, we’re taking that $100 and he’s allowed to buy something. Next, we’re going to take $10 and donate it to a charity of his choice. And then we’re taking the balance and depositing it.

Personally, I think teaching them about money and handling it is one of the most important lessons you can teach. And while I understand he’s not yet six, I don’t think it’s too early. I’m still thinking about allowance though. Maybe it’s time to start that one too.

Do your kids have bank accounts? Allowances?

Oh and that extra $5? Sshhh he’s planning on giving it back to my sister for her birthday but he wants at least a ‘buck back’.  Saving already! Go get em kid!!!