YouTube has become quite a phenomenon over the past few years. Just ask Mitch Moffit and Greg Brown, two Canadian guys who met in school and found themselves catapulting very quickly into the limelight as a result of their streaming topics. What’s fascinating about them is that they didn’t become internet famous like the ones we often affiliate with the medium. Instead, they seem to be doing something right. Their YouTube channel, AsapSCIENCE is all about science and the everyday.

I’ve been checking it out for a few weeks since it was brought to my attention and recently had a chance to meet with the guys to find out where they got their inspiration. I had discovered that Greg was a high school science teacher at the time and within two years of posting fun YouTube videos, they both realized that it was time to get serious. It was the right place, right time, and right topic. Soon, they received millions of followers. Remember the viral discussion “Is it Blue or White Dress?”

They answered it and over 20 million people saw it.

Now, AsapSCIENCE has partnered with the Samsung Solve for Tomorrow Challenge, a national educational challenge designed to inspire Canadian students to reach their full potential and get closer to STEM subjects by applying them to help better their communities.

Schools with students in Grades 6 to 12 are asked to identify and existing challenge or issue they see in their city or neighbourhood and use science, technology, engineering, and/or math (STEM) to help solve it. Samsung will host a live ‘meet & greet’ with Mitch and Greg during the first phase of the challenge and in the spring, they will visit two grand prize winning schools to learn about their winning student projects and feature them in an AsapTHOUGHT video as well has hosting a special STEM lab experiences at the schools. The winning schools will share $500,000 (CDN) in technology for their classrooms.

The Samsung Solve for Tomorrow Challenge is also supported by The Learning Partnership, a national charitable organization dedicated to advancing public education in Canada, and Let’s Talk Science, a charitable youth development organization which creates and delivers free STEM learning programs and services that support educators and strengthen student learning.

Pretty inspiring, right? So, ask your child what could be done. It could be anything simple and there is no limit in creativity here! But get moving! The contest will close on November 30, 2015. Then, 55 finalists schools will be selected in December to move onto the next phase, where they will be asked to develop the idea and capture it all on video. Then, one winning school from each province/territory will win $20,000 in classroom technology and will go onto compete in the final phase in February 2016 vying for the two grand prizes. For more information visit Samsung Solve For Tomorrow. 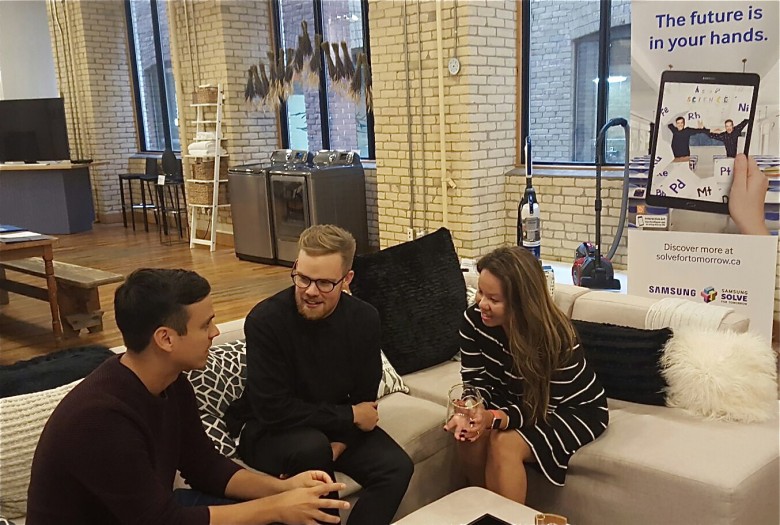