My eldest son, who thinks he is a 16 year old trapped in an 11 year old’s body, has been asking to get Facebook for the last couple of months.

I crowdsourced the question on Facebook and received various answers, one of the most common is that Facebook is becoming less and less popular with the tween to teen set. Other programs like Instagram and Tumblr and SnapChat seem to have captured the imagination. I know Hud is on Instagram and it seems pretty innocuous. 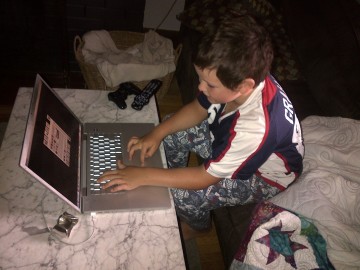 He called me today because his brother wants to get on Instagram and he said verbatim:

“Dad, I will tell him to keep it set on private, not to accept any followers he doesn’t know and to never, ever post anything inappropriate”

I went to say something and realized I didn’t have to.  Nice work Hud.

Hud is getting a phone as he will have more freedom this school year, him having one just made sense.

My wife and I primarily stay connected through our smart phones and this year Hudson will join the loop with a phone of his own. So I am already trusting him with a certain level of responsibility.

My guess is when I tell Hud that I must know all passwords and, even worse, friend him, allowing me to post all sorts of things his real friends can see, his interest will wane considerably.

What is your stance on social media and tweens/teens?

“Stop making that noise, it makes me want to throw squirrels.” The sound of crackling plastic was driving my husband to the point of rodent … END_OF_DOCUMENT_TOKEN_TO_BE_REPLACED

Summer used to be magical. The hot weather, the outdoor adventures, the complete and total lack of responsibility. School was over for the year and … END_OF_DOCUMENT_TOKEN_TO_BE_REPLACED