I write a lot about social media and my love of Instagram, but I rarely discuss our children’s roles on these social media accounts.

As parents, it is hard for us to not want to share the adorable pictures we take of our kids with the world whether it is on Instagram, Facebook, Twitter, Tumblr or any of the other many social sites available to us.

I really believe that we should be able to post photos of our kids to share with friends and family online and feel secure in the knowledge that those photos are not being violated. But sadly, that is not the case. The internet gives strangers a scary amount of access and we cannot control how these photos are used.

Case in point, the new phenomenon referred to as “baby role-playing” on Instagram. Urgh, even writing about this makes me feel ill. Basically, these accounts take photos of babies and toddlers from other Instagram accounts (without permission) and create elaborate story-lines involving the child.

All you have to do is search the hashtag #babyrp to find thousands of posts with a long conversation of comments attached.

The “story-lines” that the commenters create usually work as if one commenter is the parent/caregiver, while the other commenter is the child in the photograph, who has been given a new name, likes, dislikes and usually an age. Some accounts even align themselves as “virtual adoption agencies”, looking for homes for these children.

The commenters go back and forth with each other, sometimes talking about hugging, swaddling or feeding the baby; often times it seems “innocent” but other times it can get violent and sexual.

But even those accounts that are considered “G-rated” are still stealing photos of children, using them without the parent’s knowledge or consent and often sexualizing children/breastfeeding/the mother-child relationship.

When these posts are brought to the parent’s attention, Instagram does not seem to do anything to help the situation. 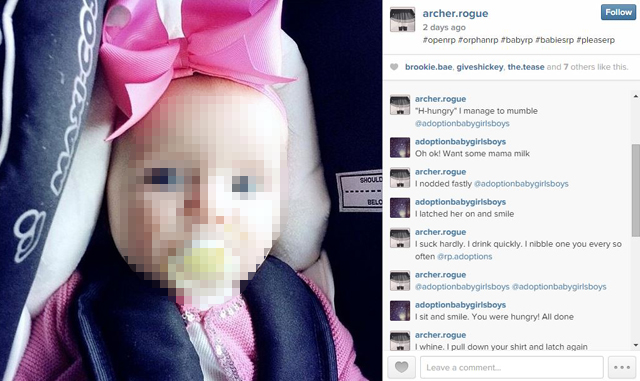 Elizabeth Harper, a mother from Gay, Ga., found a photo of her daughter posted for “adoption” on one of these accounts. She replied directly on the post and reported it as inappropriate to Instagram multiple times a day for months. 27 weeks later and it has still not been removed.

Instagram says it can only deal in terms of individual complaints against specific users and has no recourse when it comes to the phenomenon as a whole.

A petition by Fighting For All Kids, based here in Toronto, Ontario, ran on Change.org. They wanted people to write to Instagram to put an end to all role-playing accounts… it closed with only 1,047 signatures, sadly.

(Note: the photos above was found on Instagram on September 24th, 2014 and was therefore posted on September 22nd 2014. The child’s face was blurred by UrbanMoms.ca)