I love the internet, and of all the wonderful things on the internet, I love Google best. Google and I, we get each other. Sometimes we’ll stay up all night, and we’ve gotten to know each other so well that Google has started to finish my sentences. Well, not really. Although it might seem like Google knows what I’m about to say before I finish typing, in reality it only knows what other people and the internet itself have told it. This sentence-finishing (called “autocomplete”) that can be so charming and helpful is explained, by Google itself, thusly: “the search queries that you see as part of autocomplete are a reflection of the search activity of all web users and the content of web pages indexed by Google.” [emphasis mine]

Cool. Cool cool cool. So when I’m not one hundred percent sure what I’m looking for, I can just start typing all stream-of-consciousness-like, and because the chances are good that someone else out there has wondered the same thing as me in their search pane, I can find that cilantro lime chicken crock pot freezer meal recipe that I saw that one time while lying in bed and browsing on my phone but didn’t pin.

(And you know what you guys? There are a lot of crock pot freezer meals on Pinterest. I’m just saying.) But that’s just the point, isn’t it? I mean; Pinterest, Twitter, Facebook and most of all Google…they’re windows into the human psyche, aren’t they? Huffpost headlines, Buzzfeed lists, trending tweets and Google autocomplete: it’s all a reflection of what’s going on in our collective consciousness (which just makes you wonder: what would Jung have thought of the internet? Whoa). And while this can be great when you’re looking for recipes you might or might not have found while in bed but forgot to pin, it’s surprisingly not so great (okay, it’s actually shockingly terrible) if you’re a woman. The folks at UN Women played around with Google autocomplete and discovered that the internet (read: the world) still has a lot of pretty nasty opinions about women, and, along with some smart and creative people at Memac Ogilvy & Mather Dubai, created these powerful ads to bring awareness to this lingering misogyny. Note: these ads reflect actual Google search results on March 9, 2013. 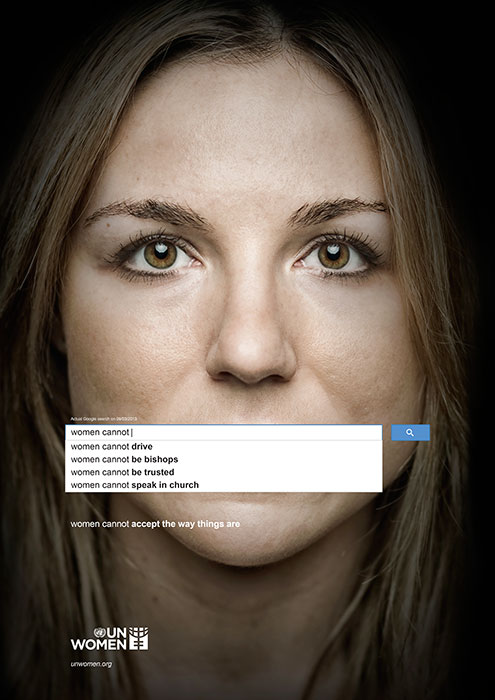 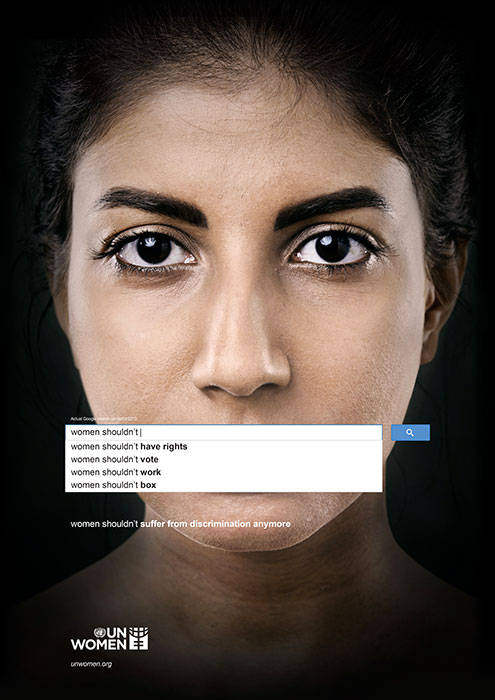 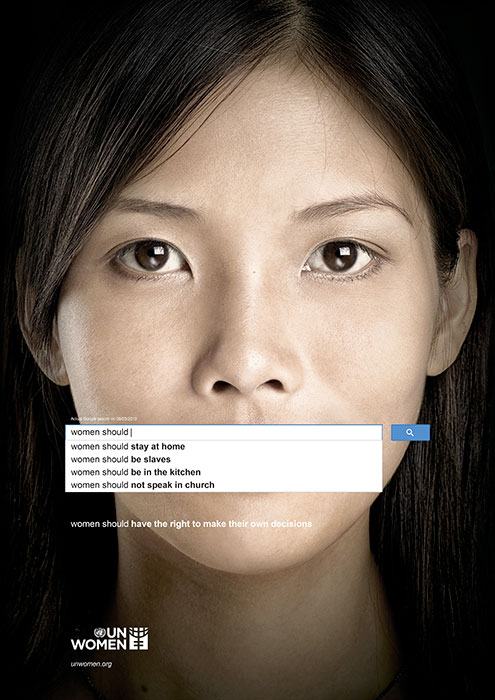 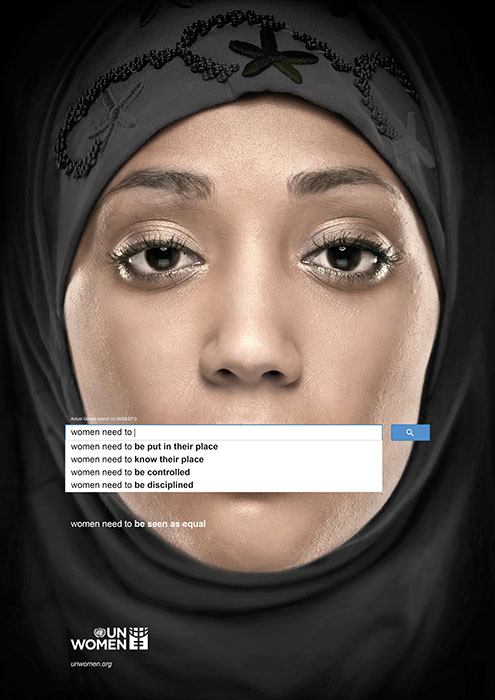 Okay. So this sucks, right? MAJORLY. Clearly, there’s still a lot of work to be done in terms of the general opinion of women and our rights, worth and role in the world. And to think I used to worry that the worst thing my girls would come across by accident while googling a makeup tutorial was random porn. But to be honest, I think seeing search results like these will probably do them more harm in the long term. I didn’t want to believe it could be real, so I tried a little experiment of my own. I started off with more active, affirmative verb phrases like, “women can” and “women are” in the hopes that these would yield more empowering and positive results. Here’s what happened, told in a series of actual screenshots around 7:30 p.m. MDT on October 24, 2013:

I think the most telling thing about this one is that despite my conscious choice to type the words “women can“, the first suggested search result is “women cannot“, as if the world is thrusting out a dismissive palm and saying, “oh no you don’t, young lady. Women aren not permitted to be imagined in terms of free agency. Do not ask what you can do, rather know that you cannot. Remember that.”

A sad commentary on what the internet in general thinks of women. The best we can hope for is boring or shallow, or an unfortunate reference to John Gray’s horrible, horrible book.

I guess I’d rather busy myself doing some shoulder exercises when the alternatives are to serve men or – sorry – BE PROPERTY?!? Sisters, you better believe I’m gonna need some strong shoulder muscles so I can punch the internet in the face for that one.

While the UN Women ads above shocked me, and my own experiments with Google autocomplete saddened me, this last one brought me down so low that I actually cried. And not just a  picturesque tear sliding poignantly down my smooth and hairless cheek, but a full on shoulder-shaking ugly cry, complete with snot dripping in my mustache (which has to be removed or at the very least shaved, obvs). Women must be silent – and if you’re silent, you are no longer a voice for your own opinions, but an object suitable for nothing more than being looked at. Which you’re not even that good at after all because, hello: mustache. So go remove it. Silently.